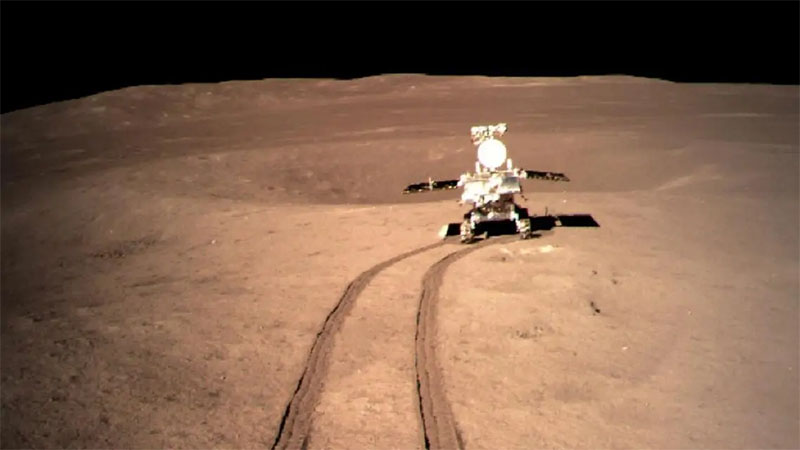 A photograph of a cube-like object captured by a Chinese rover on the far side of the moon has fanned speculation over what it could be and inspired a host of memes by Chinese internet users.

The Yutu-2 caught an image of what seems like a large cubic object on the horizon about 80 meters (87 yards) from its location, said Our Space, a Chinese government science website, citing the rover’s last log on Dec. 3.

Under the hashtag “Yutu’s latest discovery,” a series of internet memes showed the rover rolling over the lunar plain towards a pair of obelisks, a tall monolith, and even a giant hammer and sickle — the symbol of the Communist Party.

“It’s space junk left behind by the US,” one Chinese internet user wrote in a social media post.

“Get a bit closer, and you’d see it’s a nucleic acid test site for COVID-19,” another quipped.

“It’s the home of aliens!” a third said in mock horror.

Others suggested a more mundane possibility — it’s just a boulder.

The solar-powered Yutu, or “Jade Rabbit” in Chinese, will cover the distance of 80 meters in two to three lunar days, according to Our Space, or two to three Earth months.

The robotic rover has been operating in the Von Karman Crater in the South Pole-Aitken Basin since its deployment in January 2019.

The mission was a historic first, with no other nation having landed on the far side of the moon until then.

With the moon tidally locked to Earth — rotating at the same speed as it orbits our planet — most of its “dark side” is never visible to those on Earth.

Dictionary.com anoints ‘allyship’ word of the year for 2021