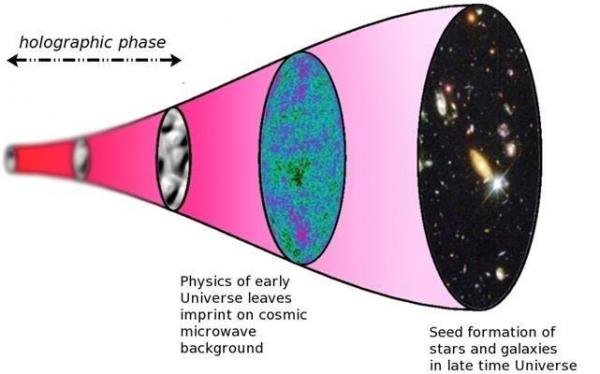 A new study suggests the universe is a hologram.

Cosmologists have long struggled to develop a unified model of the universe. Problems arise when trying to forge an agreement between models used to describe the cosmos at different scales — general relativity and quantum theory.

In a new paper published in the journal Physical Review Letters, a team of researchers from Canada, England and the United States argue a holographic explanation of the universe can account for irregularities in the cosmic microwave background, the echo of thermal energy leftover from the Big Bang.

The theory, developed in the 1990s, posits our three-dimensional reality originates in two-dimensional form at the edge of the universe.

“Imagine that everything you see, feel and hear in three dimensions — and your perception of time — in fact emanates from a flat two-dimensional field,” Kostas Skenderis, a professor of mathematical sciences at the University of Southampton, explained in a news release. “The idea is similar to that of ordinary holograms where a three-dimensional image is encoded in a two-dimensional surface, such as in the hologram on a credit card. However, this time, the entire universe is encoded!”

In recent years, powerful new telescopes have allowed researchers to observe the cosmic microwave background in greater detail. In their newly published analysis, researchers argue quantum field theories can explain the peculiarities and anomalies measured in the “afterglow” of the Big Bang.

“Holography is a huge leap forward in the way we think about the structure and creation of the universe,” Skenderis said. “Einstein’s theory of general relativity explains almost everything large scale in the universe very well, but starts to unravel when examining its origins and mechanisms at quantum level.”

Researchers suggest their latest analysis supports the idea that a holographic explanation of the universe can eventually reconcile Einstein’s theory of gravity and quantum theory.

“I hope our research takes us another step towards this,” Skenderis concluded.