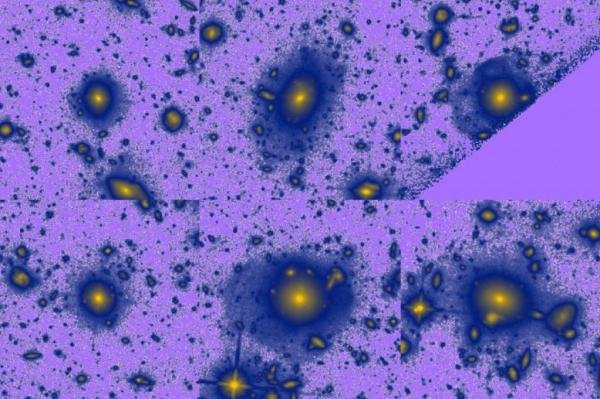 In hopes of understanding how stellar megalopolises form and grow, researchers in Spain and Portugal set out to study the outskirts of massive elliptical galaxies.

The outer realms of spiral galaxies like the Milky Way are much easier to identify. The stellar halos, featuring stars stolen from absorbed satellite galaxies, are structurally and spatially distinct from the stars making up a spiral galaxy’s arms and center.

An elliptical galaxy’s components are mostly homogenized. The galaxies, some of the most massive and expansive in the universe, appear as giant star clouds.

“With elliptical galaxies, there is direct evidence of merging of satellite galaxies going on, but it is hard to ascertain that the processes that have been happening for these galaxies to grow their outer envelopes are the same that we see occurring in disc galaxies like our own,” Fernando Buitrago, a researcher at the University of Lisbon’s Institute of Astrophysics and Space Sciences, said in a news release.

To gain some clarity, astronomers trained their telescopes on the most distant elliptical galaxies, so as to view less evolved versions of these megalopolises. The researchers analyzed light from roughly 6.2 billion years ago.

Their analysis — detailed in the Monthly Notices of the Royal Astronomical Society — revealed the presence of extended stellar envelopes, similar to the halos surrounding spiral galaxies.

“In our work, we could observe galactic cannibalism in action,” explained astronomer Ignacio Trujillo, a researcher at the University of La Laguna in the Canary Islands. “The larger galaxies were devouring the smaller ones at a high rate. Since its formation, almost half of the stars we see today in these massive galaxies are due to the fusion with other smaller galaxies.”

Analysis of the younger elliptical galaxies allowed researchers to build models tracing the evolution of different parts of the megalopolises.

“When we use a computer simulation, we can track the origin of every part of the simulated galaxy and compare with our real galaxies,” Buitrago said. “Through this method, we identified the process behind the dramatic increase of these galaxies outer parts, and were able to explain how their size evolves.”

NASA is working on making Mars safe to live on

New evidence of Mars’ watery past