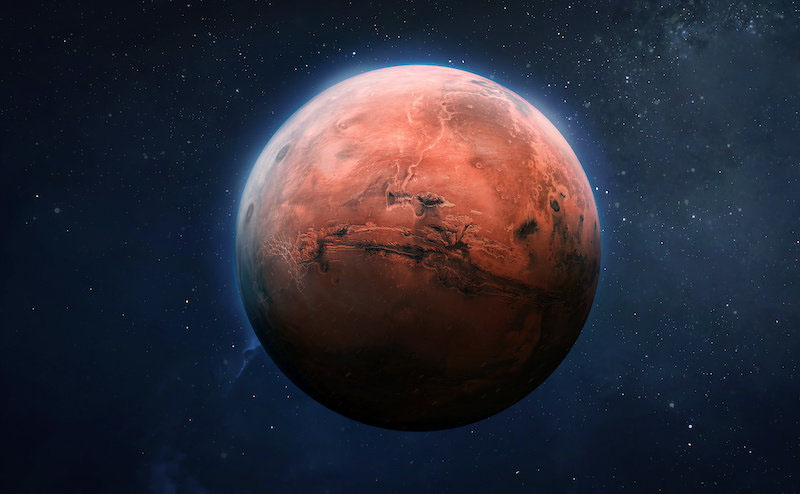 Water is essential for life on Earth and other planets, and scientists have found ample evidence of water in Mars’ early history. But Mars has no liquid water on its surface today. New research from Washington University in St. Louis suggests a fundamental reason: Mars may be just too small to hold onto large amounts of water.

Remote sensing studies and analyses of Martian meteorites dating back to the 1980s posit that Mars was once water-rich, compared with Earth. NASA’s Viking orbiter spacecraft — and, more recently, the Curiosity and Perseverance rovers on the ground — returned dramatic images of Martian landscapes marked by river valleys and flood channels.

Despite this evidence, no liquid water remains on the surface. Researchers proposed many possible explanations, including a weakening of Mars’ magnetic field that could have resulted in the loss of a thick atmosphere.

But a study published the week of Sept. 20 in the Proceedings of the National Academy of Sciences suggests a more fundamental reason why today’s Mars looks so drastically different from the “blue marble” of Earth.

“Mars’ fate was decided from the beginning,” said Kun Wang, assistant professor of earth and planetary sciences in Arts & Sciences at Washington University, senior author of the study. “There is likely a threshold on the size requirements of rocky planets to retain enough water to enable habitability and plate tectonics, with mass exceeding that of Mars.”

For the new study, Wang and his collaborators used stable isotopes of the element potassium (K) to estimate the presence, distribution and abundance of volatile elements on different planetary bodies.

Potassium is a moderately volatile element, but the scientists decided to use it as a kind of tracer for more volatile elements and compounds, such as water. This is a relatively new method that diverges from previous attempts to use potassium-to-thorium (Th) ratios gathered by remote sensing and chemical analysis to determine the amount of volatiles Mars once had. In previous research, members of the research group used a potassium tracer method to study the formation of the moon.

Wang and his team measured the potassium isotope compositions of 20 previously confirmed Martian meteorites, selected to be representative of the bulk silicate composition of the red planet.

Using this approach, the researchers determined that Mars lost more potassium and other volatiles than Earth during its formation, but retained more of these volatiles than the moon and asteroid 4-Vesta, two much smaller and drier bodies than Earth and Mars.

The researchers found a well-defined correlation between body size and potassium isotopic composition.

“The reason for far lower abundances of volatile elements and their compounds in differentiated planets than in primitive undifferentiated meteorites has been a longstanding question,” said Katharina Lodders, research professor of earth and planetary sciences at Washington University, a coauthor of the study. “The finding of the correlation of K isotopic compositions with planet gravity is a novel discovery with important quantitative implications for when and how the differentiated planets received and lost their volatiles.”

“Martian meteorites are the only samples available to us to study the chemical makeup of the bulk Mars,” Wang said. “Those Martian meteorites have ages varying from several hundred millions to 4 billion years and recorded Mars’ volatile evolution history. Through measuring the isotopes of moderately volatile elements, such as potassium, we can infer the degree of volatile depletion of bulk planets and make comparisons between different solar system bodies.

“It’s indisputable that there used to be liquid water on the surface of Mars, but how much water in total Mars once had is hard to quantify through remote sensing and rover studies alone,” Wang said. “There are many models out there for the bulk water content of Mars. In some of them, early Mars was even wetter than the Earth. We don’t believe that was the case.”

Zhen Tian, a graduate student in Wang’s laboratory and a McDonnell International Academy Scholar, is first author of the paper. Postdoctoral research associate Piers Koefoed is a co-author, as is Hannah Bloom, who graduated from Washington University in 2020. Wang and Lodders are faculty fellows of the university’s McDonnell Center for the Space Sciences.

The findings have implications for the search for life on other planets besides Mars, the researchers noted.

Being too close to the sun (or, for exoplanets, being too close to their star) can affect the amount of volatiles that a planetary body can retain. This distance-from-star measurement is often factored into indexes of “habitable zones” around stars.

“This study emphasizes that there is a very limited size range for planets to have just enough but not too much water to develop a habitable surface environment,” said Klaus Mezger of the Center for Space and Habitability at the University of Bern, Switzerland, a co-author of the study. “These results will guide astronomers in their search for habitable exoplanets in other solar systems.”

Wang now thinks that, for planets that are within habitable zones, planetary size probably should be more emphasized and routinely considered when thinking about whether an exoplanet could support life.

“The size of an exoplanet is one of the parameters that is easiest to determine,” Wang said. “Based on size and mass, we now know whether an exoplanet is a candidate for life, because a first-order determining factor for volatile retention is size.”

Materials provided by Washington University in St. Louis. Original written by Talia Ogliore. Note: Content may be edited for style and length.

Europe, Japan probes to get 1st look at destination Mercury