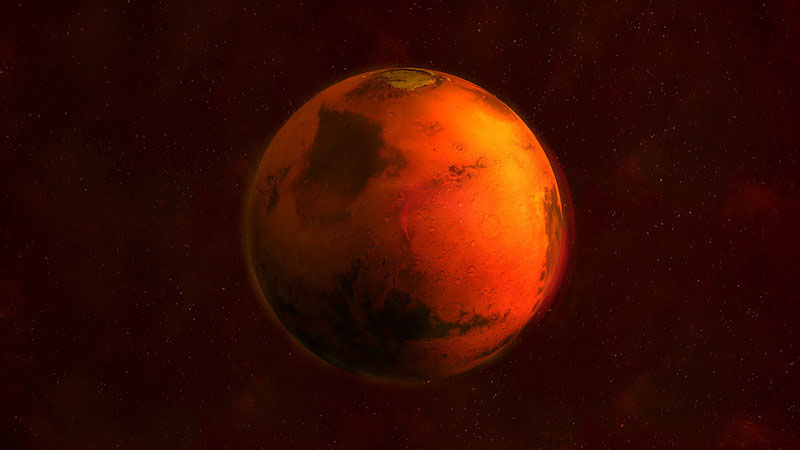 As part of a team of collaborators from Northern Arizona University and Johns Hopkins University, NAU PhD candidate Ari Koeppel recently discovered that water was once present in a region of Mars called Arabia Terra.

Arabia Terra is in the northern latitudes of Mars. Named in 1879 by Italian astronomer Giovanni Schiaparelli, this ancient land covers an area slightly larger than the European continent. Arabia Terra contains craters, volcanic calderas, canyons and beautiful bands of rock reminiscent of sedimentary rock layers in the Painted Desert or the Badlands.

These layers of rock and how they formed was the research focus for Koeppel along with his advisor, associate professor Christopher Edwards of NAU’s Department of Astronomy and Planetary Science along with Andrew Annex, Kevin Lewis and undergraduate student Gabriel Carrillo of Johns Hopkins University. Their study, titled “A fragile record of fleeting water on Mars,” was funded by the NASA Mars Data Analysis Program and recently published in the journal Geology.

In order to get a better understanding of what happened to create the rock layers, the scientists focused on thermal inertia, which defines the ability of a material to change temperature. Sand, with small and loose particles, gains and loses heat quickly, while a solid boulder will remain warm long after dark. By looking at surface temperatures, they were able to determine the physical properties of rocks in their study area. They could tell if a material was loose and eroding away when it otherwise looked like it was solid.

“No one had done an in-depth thermal inertia investigation of these really interesting deposits that cover a large portion of the surface of Mars,” Edwards said.

To complete the study, Koeppel used remote sensing instruments on orbiting satellites. “Just like geologists on Earth, we look at rocks to try to tell stories about past environments,” Koeppel said. “On Mars, we’re a little bit more limited. We can’t just go to a rock outcrop and collect samples — we’re pretty reliant on satellite data. So, there are a handful of satellites orbiting Mars, and each satellite hosts a collection of instruments. Each instrument plays its own role in helping us describe the rocks that are on the surface.”

Through a series of investigations using this remotely gathered data, they looked at thermal inertia, plus evidence of erosion, the condition of the craters and what minerals were present.

“We figured out these deposits are much less cohesive than everyone previously thought they were, indicating that this setting could only have had water for only a brief period of time,” said Koeppel. “For some people, that kind of sucks the air out of the story because we often think that having more water for more time means there’s a greater chance of life having been there at one point. But for us, it’s actually really interesting because it brings up a whole set of new questions. What are the conditions that could have allowed there to be water there for a brief amount of time? Could there have been glaciers that melted quickly with outbursts of huge floods? Could there have been a groundwater system that percolated up out of the ground for only a brief period of time only to sink back down?”

Koeppel started his college career in engineering and physics but switched to studying the geological sciences while earning his master’s degree at The City College of New York. He came to NAU to work with Edwards and immerse himself in the thriving planetary science community of Flagstaff.

“I got into planetary science because of my excitement for exploring worlds beyond Earth. The universe is astoundingly big, even Mars is just the tip of the iceberg,” Koeppel said. “But we’ve been studying Mars for a few decades now, and at this point, we have a huge accumulation of data. We’re beginning to study it at levels that are comparable to ways we’ve been able to study Earth, and it’s a really exciting time for Mars science.”

Materials provided by Northern Arizona University. Note: Content may be edited for style and length.

Scientists find 200,000-year-old remains of one of modern humanity’s ‘most recent ancestors’