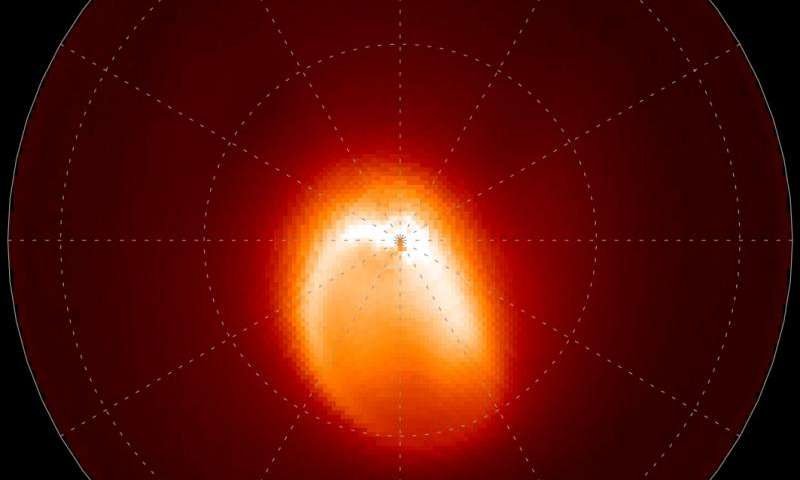 Jupiter’s Great Red Spot has a sibling — or a rivalry. Astronomers at the University of Leicester have discovered a second “great spot.” Scientists dubbed the feature the Great Cold Spot.

The new great spot is located in Jupiter’s thermosphere, the gas giant’s thin, upper atmosphere. The region is colder and more dynamic than lower layers of the atmosphere.

“The Great Cold Spot is much more volatile than the slowly changing Great Red Spot, changing dramatically in shape and size over only a few days and weeks, but it has re-appeared for as long as we have data to search for it, for over 15 years,” researcher Tom Stallard said in a news release. “That suggests that it continually reforms itself, and as a result it might be as old as the aurorae that form it — perhaps many thousands of years old.”

Researchers believe the localized vortex is powered by the planet’s polar aurorae, which drives thermal energy from the planet’s magnetic field into the atmosphere, creating a layer of cooling in the thermosphere. This sustained cooling powers the dark cyclone-like system.

Stallard and his colleagues use infrared instruments on the Very Large Telescope to map the storm and surround atmosphere’s temperature and density. The cooling system is surrounded by intense heat.

While the Great Cold Spot is more volatile than the Great Red Spot, it is a surprisingly stable aurora-powered phenomenon.

Energy transfers inspired by Earth’s auroras are more sporadic, inspired by the sun’s erratic patterns. Auroras on Jupiter are fueled by a slow, stead supply of gases from the volcanoes of its moon, Io.

“Earth’s aurora can drive heat quickly across the whole planet, making the upper atmosphere ring like a bell, while Jupiter’s fast spin traps this energy nearer the poles,” Stallard explained.

Researchers described their latest analysis of the Great Cold Spot in the journal Geophysical Research Letters.

Antiparasitic drug may be new treatment for brain tumors

Scientists create mouse that may predict next flu pandemic