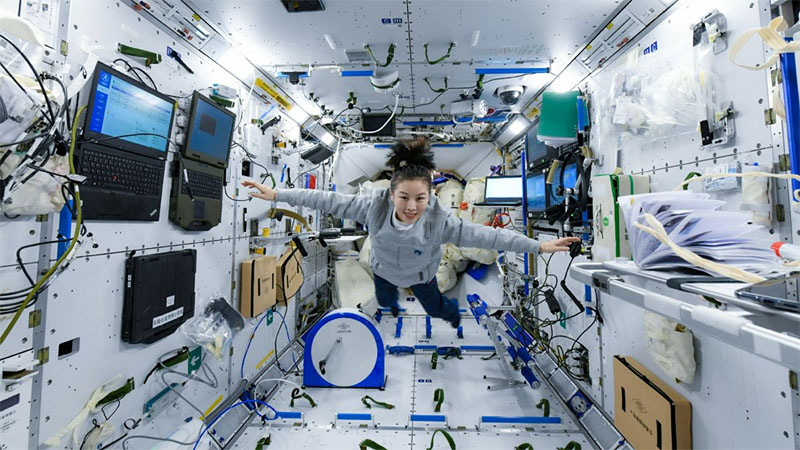 Chinese astronauts on Thursday beamed back a science lesson from the country’s under-construction space station.

The lecture focused on physics, aiming to illustrate how the weightless environment affects buoyancy, the movement of objects and optics.

Students from five cities, including Beijing and the semi-autonomous region of Hong Kong, peppered the astronauts with questions about living conditions in space and were treated to a virtual tour of the station. The event was also open to the public through a livestream.

Wang Yaping, the only woman aboard the station, served as the main instructor, while Ye Guangfu assisted and commander-in-chief Zhai Zhigang worked the camera. Wang had taught a similar lesson while aboard one of China’s earlier experimental stations in 2013.

The three arrived at the station in October for a six-month stay, charged mainly with preparing the main Tianhe module for the arrival of two additional modules named Mengtian and Wentian ahead of completion by the end of next year.

Wang last month became the first Chinese woman to conduct a spacewalk when she and Zhai spent six hours outside the module to install equipment and carry out tests alongside the station’s robotic service arm.

Their Shenzhou-13 mission is China’s longest since it first put a human in space in 2003, becoming only the third country to do so after Russia and the U.S.

The three are the second crew on the permanent station, which upon completion will weigh about 66 tons, much smaller than the International Space Station, which launched its first module in 1998 and weighs around 450 tons.

Along with installing equipment in preparation for the station’s expansion, the crew is assessing living conditions in the Tianhe module and conducting experiments in space medicine and other areas.

China’s space program was barred from the International Space Station, mainly due to U.S. concerns over its intimate military connections.

China has also pushed ahead with un-crewed missions, and its lunar exploration program generated media buzz this week when its Yutu 2 rover sent back pictures of what was described by some as a “mystery hut, but was most likely only a rock of some sort.

The rover is the first to be placed on the little-explored far side of the moon, while China’s Chang’e 5 probe returned lunar rocks to Earth for the first time since the 1970s last December. A Chinese rovernother, meanwhile, is searching for evidence of life on Mars.

The program has also drawn controversy. In October, China’s Foreign Ministry brushed-off a report that China had tested a hypersonic missile two months earlier, saying it had merely tested whether a new spacecraft could be reused.

Brief Presence of Water in Arabia Terra On Mars