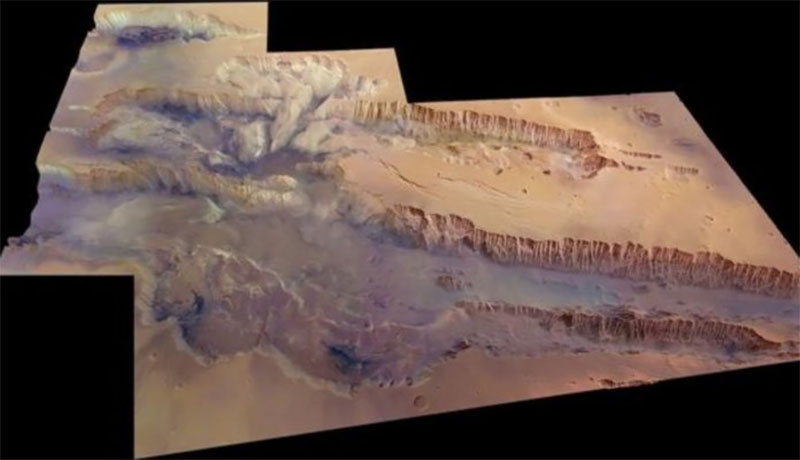 Nobody would have guessed it, but there is a massive amount of water, most likely in the form of ice, just beneath the floor of Mars’ famous Valles Marineris, which is 4,500 km long, 200 km broad, and up to 11 km deep, making it the longest canyon in the Solar System.

According to a study conducted by specialists from the European Space Agency (ESA) and the Russian Space Agency (Roscosmos), up to 40% of the material closest to the surface of a large 41,000 square km region in the canyon’s heart could be water ice.

ExoMars instruments discovered exceptionally high levels of hydrogen in Candor Chaos, a region the size of the Netherlands located in the middle of Valles Marineris. And, given that life on Earth is inextricably linked to water, the discovery lends credence to the notion that the same could have occurred on Mars. Or, even better, that there are still living creatures present.

“We discovered that the central part of Valles Marineris was filled with water,” explain the authors, “much more water than we expected. This looks a lot like water. permafrost regions of the Earth, where water ice persists permanently under dry soil due to constant low temperatures.”

According to the scientist, if the hydrogen detected is really bound to oxygen to form water molecules, “up to 40 percent of the material near the surface in this region appears to be water.”

The ExoMars orbiter, which has been orbiting Mars since 2018, includes instruments, such as the Fine-Resolution Epithermal Neutron Detector (FREND), which is a component of the Trace Gas Orbiter (TGO), that look for water by detecting neutrons emitted at or near the Martian surface. As neutrons are created when intense cosmic ray particles collide with the Martian soil, drier surfaces emit more neutrons than wetter surfaces, allowing the researchers to quantify the amount of water in a specific region. Talking about the number of neutrons emitted. This technology enables the TGO to detect water up to a meter below the surface from Mars’ orbit, considerably increasing researchers’ ability to locate hidden pockets of water.

“With TGO,” the authors explain, “we can look up to a meter under the layer of dust and see what is really happening underground on Mars and, more importantly, locate water-rich ‘oases’ that could not be detected. with previous instruments “.

The easily accessible area has become a strong candidate for future exploration missions, during which astronauts will be able to find out exactly what kind of ice is present and, of course, if there was or still is life there.