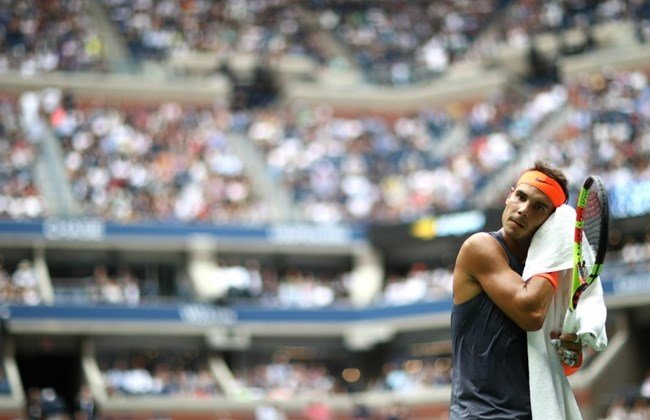 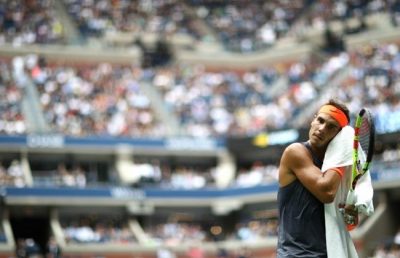 Defending champion Rafael Nadal retired from his U.S. Open semifinal because of a painful right knee after dropping the opening two sets, putting Juan Martin del Potro back in a Grand Slam final for the first time since he won the 2009 title at Flushing Meadows.

Del Potro was leading 7-6 (3), 6-2 after two hours of play Friday, when Nadal shook his head and said he had to stop.

“That was not a tennis match at the end. Just one player playing, the other staying on one side of the court,” Nadal said. “I hate to retire, but staying one more set out there, playing like this, would be too much for me.”

The no. 1-seeded Nadal has a history of tendinitis in his knees, and he said he felt a problem in the right one early in the first set. He was visited by a trainer at the changeover after the match’s seventh game, and tape was applied below the joint.

At the next changeover, though, Nadal pulled off the tape.

After the third game of the second set, he had a medical timeout so the trainer could massage his right leg and once again apply tape.

But Nadal’s movement was clearly limited, and by the end he was walking with a bit of a hitch in his gait between points. At one juncture, he approached the chair umpire to complain about a late call from a line judge and mentioned in passing that he was going to have to quit. Soon enough, he did just that.

“Of course, it’s not the best way to win a match,” said del Potro, who hugged Nadal when it was over. “I don’t like to see him suffering on court today. So I’m sad for him.”

For del Potro, it was an odd way to return to an important summit. Nine years ago, he stunned Nadal in the semifinals and Roger Federer in the final at the U.S. Open at age 20. He was considered a rising star at the time, but a series of wrist operations – one on his dominant right arm and three on his left – slowed his career and kept him out of two and a half years’ worth of major tournaments.

“It means a lot to me,” del Potro said. “I didn’t expect to get in another Grand Slam final.”

On Sunday, the powerful Argentine with the massive forehand that zips along at more than 160 kilometers an hour will face two-time U.S. Open champion Novak Djokovic or 2014 runner-up Kei Nishikori. They were meeting in the second semifinal Friday night.

Djokovic entered the day with a 13-match winning streak against Nishikori.

All four semifinalists were past finalists at Flushing Meadows, the first time that’s happened at the U.S. Open since 2011.