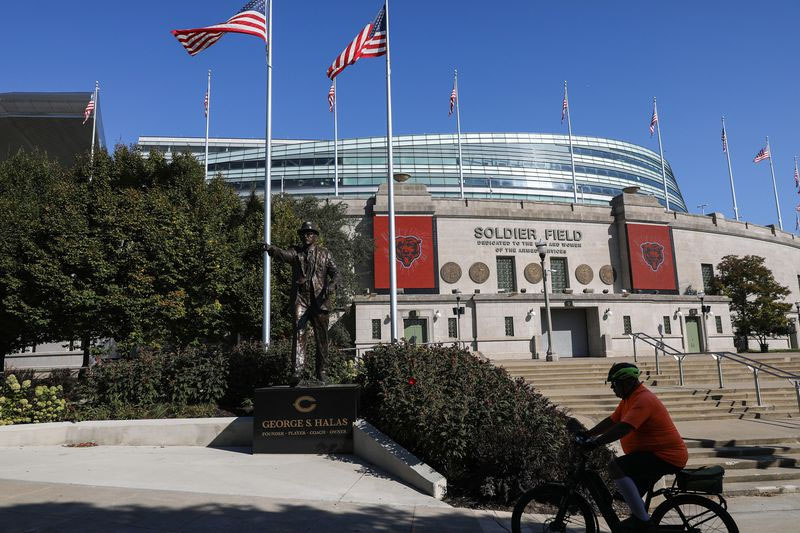 Chicago Bears standoff could be a lose-lose for Mayor Lori Lightfoot: a huge defeat if the team leaves, a potentially huge price tag for taxpayers if it stays

The mayor faces a similarly intimidating set of obstacles in her bid to keep the Bears from decamping to Arlington Heights: Come up with a miracle and billions of dollars in taxpayer money to convince them to stay, further hamstringing the city’s finances. Or go down in history as the mayor who lost a charter member of the National Football League to the suburbs.

“Obviously, we want to keep the Bears,” said Ald. Sophia King, whose ward includes Soldier Field. “At all costs? No.”

Should the team leave, Lightfoot is likely to face blame from a segment of residents who would view such an event with the same revulsion reserved for the 2019 double-doink missed field goal. But she’ll also catch heat if the teams stays at the lakefront and struggling Chicagoans think she gave them too big a public subsidy to do so.

The situation is one that has played out repeatedly across the country, said University of Illinois at Chicago political science professor Chris Mooney.

[Most read] The Arlington Heights Bears? Here’s what to know about the possible move from Soldier Field, with reaction from City Hall to the suburbs. »
“Think about the Baltimore Colts. They were just as iconic as the Bears; Johnny Unitas standing there covered in mud in his converse,” Mooney said. “Then they picked up in the middle of the night and moved. It’s a business decision.”

“Each one is unique in its particulars but this is a pattern that’s been going on for a few decades,” Mooney added. “Lori just got in the way of this truck running down the street.”

Therein lies the challenge for Lightfoot, King said. The costs and benefits of keeping the team range from relatively easy-to-quantify dollars-and-cents considerations — taxes the team pays, the number of people they employ and the bottom line on any benefits package they would receive to stay — to more intangible but also important concerns.

“The emotional benefits to the city are hard to weigh, but we need to consider those too,” King said.

“It’s not easy, it’s not an easy decision,” King said. “But then any decision (Lightfoot) is going to make is generally going to be a tough decision. She doesn’t have to do it alone.”

Adding to the city’s challenges is Lightfoot’s negotiating style, which has drawn sharp criticism and second-guessing after a series of high-profile standoffs with the Chicago Teachers Union. In her dealings with the CTU, Lightfoot has issued heated public ultimatums only to quickly back off them. She has been criticized for giving away too much, too soon, in negotiations.

Some residents saw a parallel between her comments last week that the Bears canceled a meeting with her and haven’t yet told her what they want and how she handled CTU demands during the 2019 teacher strike as well as a series of standoffs over the reopening of schools during the COVID-19 pandemic.

Ald. Byron Sigcho-Lopez, whose 25th Ward includes part of the South Loop west of Soldier Field, said the situation is particularly challenging for Lightfoot because Chicagoans want her to find a solution but have doubts about whether she’s the person to do it, based on her track record.

“I always judge people by what they do, not by what they say,” said Sigcho-Lopez, a mayoral critic. “I hope, for the sake of the city of Chicago, that we can negotiate with the Bears in good faith and figure it out. But I think a lot of people would like not only to hear it (from the mayor), but to see it. We haven’t seen it yet.”

King called on Lightfoot, whose term ends in 2023, to take advice from aldermen, economists and others while considering how far to go to appease Bears owners. She acknowledged the mayor has a reputation for not consulting outside voices as she weighs her options, but King said she hopes that will change: “I think we all grow as politicians. Hopefully she will be able to do that.”

West Side Ald. Michael Scott, 24th, said he associates the Bears with Chicago and would “hate to see them leave.”

“But I do understand the fiscal challenges around keeping them here in Chicago,” SCott said. “From what I understand nothing short of a new stadium with a dome will suffice.”

South Side Ald. Roderick Sawyer, whose father Eugene Sawyer was mayor in the 1980s, said the city should “should make a serious effort, do all we can to keep the Bears here.”

“I’m hopeful that that the administration would do what’s necessary to have serious conversations with the Bears organization, about what it needs, what do they need to stay here in the city of Chicago proper,” Sawyer added.

Wrigleyville Ald. Tom Tunney, 44th, noted the situation is different in key ways from when the city was negotiating with the Ricketts family over Wrigley Field renovations. Importantly, the Rickettses own the historic baseball stadium, while the McCaskey family is a tenant at Soldier Field.

“Bears ownership wants to own their facility, and they want to take a serious look at this once-in-a-lifetime opportunity to aggregate this large property that’s already being used for a sporting purpose,” he said.

But the Wrigley Field talks gave Tunney a front-row seat to the anxiety weighing on a mayor faced with the possibility of losing a team.

“When we were in negotiations with the Rickettses, Mayor Emanuel was in my opinion unduly concerned with the threat of the Cubs leaving Wrigley Field,” Tunney said. “As mayor, he did not want that to happen on his watch. Losing a major franchise, it goes against the civic pride.”

And Downtown Ald. Brian Hopkins, 2nd, said it’s clearly going to fall on Lightfoot to do what it takes to stop the team from leaving, or take the “L.”

“It’s up to the mayor. She’s going to have to make the deal,” he said. “And negotiations seem to be off to a poor start, and that’s concerning to me. Negotiating doesn’t seem to be in this mayor’s wheelhouse, but hopefully she has good advisors around her on this.”

Lightfoot’s in a particularly tough spot, Hopkins said, because it’s not clear what package the Bears might get to move to Arlington Heights, and how much wiggle room the mayor will have to make a counter-offer given the city’s tough financial situation and the lack of available open land near Soldier Field. But that won’t stop people from blaming her if she can’t do it, he said.

“What’s the old saying? When you’re the mayor you wear the jacket for everything,” Hopkins said. “Fingers will definitely be pointed at her if they leave, especially since, as we all know, she’s a loyal Bears fan. So there’s no doubt she will do everything in her power to make it work, and there’s just no way to hide from that failure if it doesn’t. And she has to approach the negotiations not with the loyalty of a fan, but with the dispassion of a mayor. It’s just a really tough situation.”