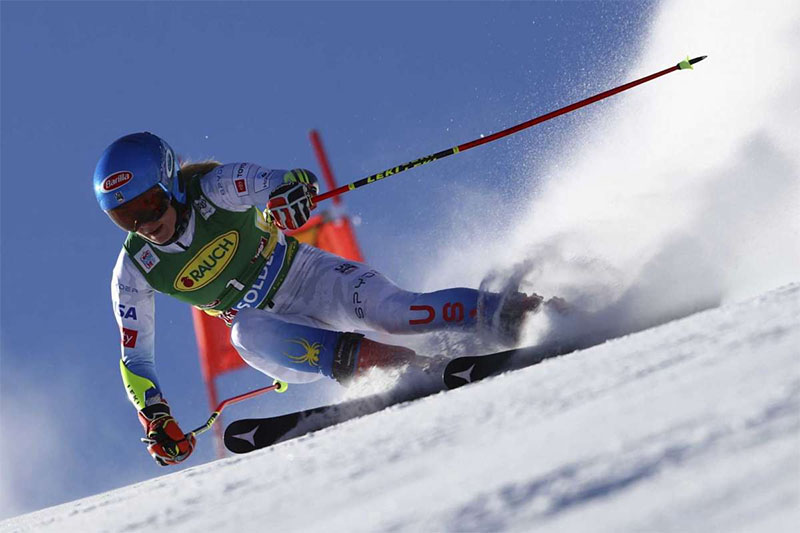 Lara Gut-Behrami edged Mikaela Shiffrin by two-hundredths of a second as the pair built a big lead in the first run of the season-opening women’s World Cup giant slalom on Saturday.

Austrian skier Stephanie Brunner was the fastest of the rest of the field but trailed by more than half a second in third.

The Italian, who won the race a year ago and dominated the discipline with four wins last season, lost control of her right outside ski halfway through her run, when she was already .57 behind then-leader Shiffrin.

Gut-Behrami, who is the GS world champion, had an aggressive run in perfect sunny conditions on the Rettenbach glacier as the Swiss star led Shiffrin’s time by a few hundredths throughout her run.

Gut-Behrami had the faster start and was .09 ahead at the first split but lost a fraction of her lead over Shiffrin at each of the following check points.

The American three-time overall champion opened the race with a clean run.

Shiffrin briefly shrugged her shoulders after finishing, but her time easily held up when other pre-race favorites came down.

“It was a really super clean run. I felt really good in my skiing,” Shiffrin said. “Watching Lara, she is also super on point and maybe a little bit more active, like a little extra something.”

New Zealand’s Alice Robinson, who won the season opener in 2019, finished .90 off the lead; Federica Brignone, the 2020 overall World Cup champion, was 1.51 seconds behind; and French standout Tessa Worley had 1.65 to make up in the second leg.

With some of the big names struggling, others took their chance to finish the opening run in the top 10.

Amid tight anti-coronavirus measures, the race was attended by 9,000 spectators.

A minute’s silence prior to the race was dedicated to Gian Franco Kasper, the longstanding FIS president who died in July, just weeks after Johan Eliasch was elected as his successor.