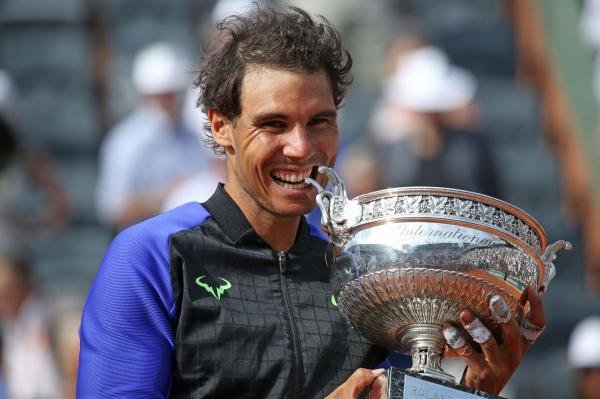 Nadal’s “La Decima” — Spanish for 10th — in Paris lifts him into historic territory. He becomes the first man or woman in the Open Era, which began in 1968, to win 10 titles at a Grand Slam. It marked another near-perfect performance in his favorite event and on his favorite surface.

The 31-year-old Nadal moved into solo second on the all-time major titles list, breaking a tie with Pete Sampras for second place and behind only Roger Federer’s 18.

Nadal will ascend to world No. 2 in the ATP Rankings released Monday as well, moving into the top two for the first time since 2014.

The third-seeded Wawrinka of Switzerland was vying for his second Roland Garros title, winning in 2015 for one of his three major championships. He is now 3-1 in Grand Slam finals.

“It’s always been an honor to play against you,” Wawrinka told Nadal as he addressed the crowd. “Something really special and just congrats for your career and all your team.”

Nadal did not lose a set in this year’s tournament and only dropped a total of 35 games. He is now 79-2 at the French Open over his career and 102-2 in all best-of-five-set matches on clay.

This was the first Roland Garros final between two players aged 30 and over since 1969, when 30-year-old Rod Laver defeated 34-year-old Ken Rosewall.

In the final set, another break gave Nadal a 4-1 lead and he would confirm his date with destiny as Wawrinka netted a backhand on his second match point.

Football reforms: Scrapping 45-minute half to be debated at Ifab