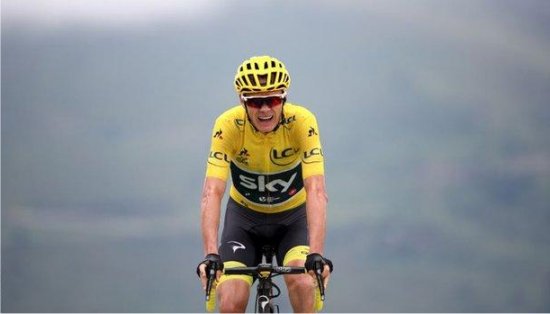 Britain’s Chris Froome won the Tour de France for the fourth time as Dylan Groenewegen sprinted to victory in Paris on the 21st and final stage.

Groenewegen defeated German Andre Greipel in a frenetic final sprint on the Champs Elysees but the day belonged to 32-year-old Froome.

The Team Sky rider is now second in the all-time list after completing his third successive victory.

Rigoberto Uran was second, 54 seconds behind, with Romain Bardet third.

“Each time I have won has been so unique, such a different battle to get to this moment,” said Froome afterwards.

“They are all so special but this will be remembered as the closest and most hard fought.”

It was a largely processional stage before they reached Paris – with Yoann Offredo stopping to greet family and friends as the race passed close to his home and Cyril Gautier writing a marriage proposal on a piece on paper that was then broadcast on television.

But the stage ended in the expected bunch finish – with several teams trying to set up their sprinters before Lotto NL-Jumbo’s Groenewegen held off his rivals to cross the line first.

Lotto Soudal’s Greipel banged his head against his handlebars in frustration as he ended a Tour without a stage win for the first time.

An unusual thing happened to Froome during the 2017 Tour – he had the yellow jersey taken off him.

Froome cracked on the steep incline up to the summit finish at Peyragudes at the end of stage 12, losing 22 seconds to Italian Fabio Aru.

It gave Aru a six-second advantage and the rest of Froome’s rivals hope that they could seriously threaten the 32-year-old for the first time in several years.

“I suffered in the Pyrenees and lost time on Peyragudes – but normally a bad day in the mountains you can lose three minutes,” added Froome.

If his rivals thought Froome – who came into the race a little light on miles – was vulnerable he responded superbly, sprinting up to the finish in Rodez at the end of stage 14 to reclaim yellow from the tiring Aru.

Froome did not surrender the jersey again. The only time he was seriously threatened was when he had to stop to change a wheel shortly after he had been attacked by his rivals on stage 15 – but he managed to close the gap they had opened.

And even though there were only 29 seconds separating the top three of Froome, Bardet and Uran going into the time trial in Marseille on Saturday’s penultimate stage, Froome had long ago regained control of the race.

“Every Tour is hard. It’s difficult to say which was the hardest – every year you suffer. Definitely this was closest,” he added after finishing third in the time trial to extend his lead.

Froome did not win a stage this year – becoming only the seventh rider to win a Tour without one – but does move second in the list of most Tour titles.

Only the legendary Jacques Anquetil, Eddy Merckx, Bernard Hinault and Miguel Indurain – all with five wins – stand above Froome.

And there are now only three men to have worn yellow on more days – Froome has worn it 59 times and moved above Anquetil on the all-time list during this year’s Tour.