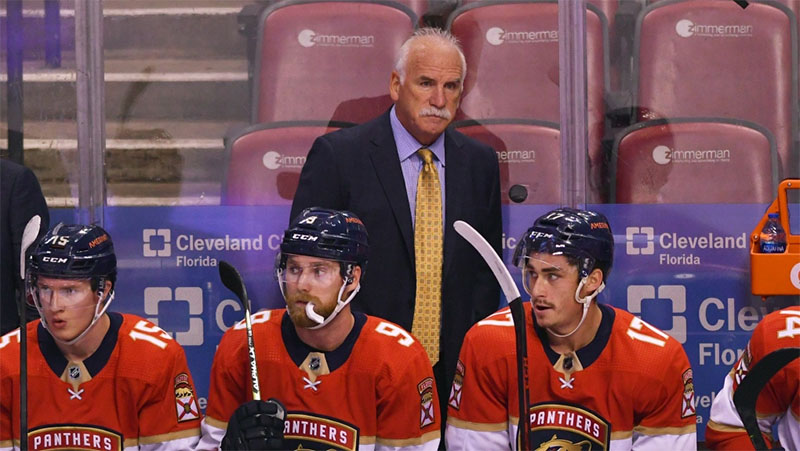 Florida Panthers Head Coach Joel Quenneville has resigned in the fallout from the Chicago Blackhawks sexual abuse case that has exposed failures at nearly every level of professional hockey.

Quenneville, the head coach of the Blackhawks from 2008 to 2019, met with NHL commissioner Gary Bettman on Thursday afternoon regarding an independent report released earlier this week detailed an alleged sexual assault between former Blackhawks video coach Brad Aldrich and “John Doe” in May 2010.

Late Thursday, the league announced that Quenneville had resigned.

“Following a meeting today with Commissioner Bettman at National Hockey League offices, which was part of the league’s process to decide how to move forward, Joel made the decision to resign and the Florida Panthers accepted that resignation,” Panthers President and CEO Matt Caldwell said in a statement.

In an exclusive interview with TSN’s Rick Westhead on Wednesday, Kyle Beach, a former member of the Blackhawks farm system, came forward to reveal himself as “John Doe” in the matter and said Quenneville knew about the allegation and chose to focus on the team’s Stanley Cup run instead.

“I’ve witnessed meetings, right after I reported it to James Gary, that were held in Joel Quenneville’s office,” Beach said. “There’s absolutely no way that he can deny knowing it.”

Beach also said in the interview that he filed a complaint with the NHL players’ association, but it was ignored.

“I reported every single detail to an individual at the NHLPA,” Beach said in the interview. “I believe two different people talked to Don Fehr and for him to turn his back on the players, when his one job is to protect the players at all costs, I don’t know how that can be your leader. I don’t know how he can be in charge.”

In a statement on Thursday, NHLPA Executive Director Donald Fehr apologized to Beach for his role in the matter.

“There is no doubt that the system failed to support him in his time of need, and we are part of that system,” Fehr said in the statement.

“Mr. Beach stated that several months after the incident he told someone at the NHLPA the details of what happened to him. He is referring to one of the program doctors with the NHL/NHLPA player assistance program. While this program is confidential between players and the doctors, the grave nature of this incident should have resulted in further action on our part. The fact that it did not was a serious failure. I am truly sorry, and I am committed to making changes to ensure it does not happen again.”

The Blackhawks were also fined US$2 million following release of the report.

Meanwhile, Winnipeg Jets GM Kevin Cheveldayoff — who was the Blackhawks assistant GM in 2010 — is scheduled to meet with the commissioner on Friday.

Several players on the Blackhawks at the time have since said they either did not know about the allegation, or only found out several months later. The report does detail alleged player bullying at Beach’s expense in regards to the matter.

Aldrich has maintained the encounter was consensual.