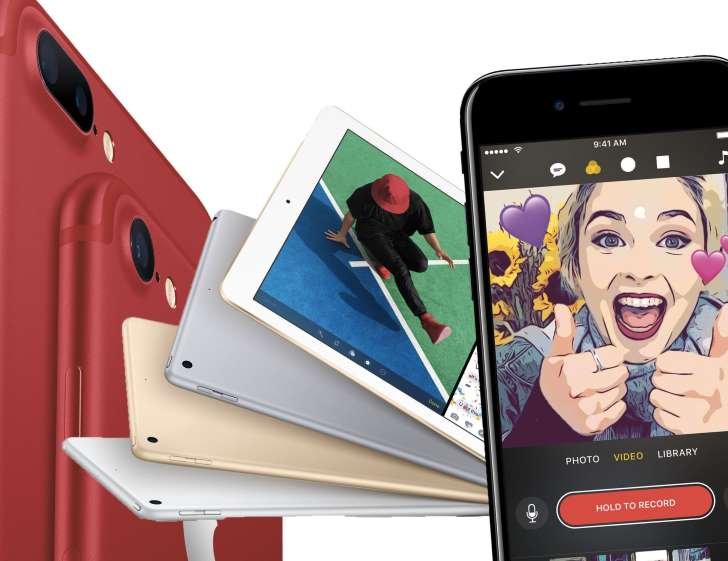 Apple unloaded a laundry basket of announcements Tuesday, with changes for its iPad and the iPhone.

Here’s a quick rundown of Apple’s news, including a new color for the iPhone, the disappearance of the iPad Air and a new app for social-media-focused video editing.

Gone with the Air

The iPad Air is no more. Long live the iPad. Apple quietly knocked off its iPad Air 2, replacing it with the 9.7-inch iPad with a cheaper price and a faster processor. The iPad now starts at $329, £339 or AU$469 and features an A9 chip, similar to the one used in the iPhone 6S. The iPad Mini 2 is also gone, but the Mini 4 will live on, now offering a 128GB model.

You can get your hands on new iPads on March 24. Take a look at how Apple’s new iPad stacks up against the tablet competition.

The iPhone 7 and 7 Plus are getting a makeover, in vibrant red aluminum. The new color is a part of a fundraiser for the nonprofit Product Red, which fights HIV and AIDS in sub-Saharan Africa. Apple has raised more than $130 million toward that effort since 2006, the company said.

The red iPhone will be available March 24.

Apple launched a new social-oriented video-editing app called Clip, which seeks to be a more mobile-friendly version of iMovie. You will be able to trim footage and add effects, captions and soundtracks to your videos. The videos are square, meaning they’re more fit for Instagram or Twitter than your desktop.

Clip will work on the iPhone 5S and later models when it’s released in April.

Apple Watches are getting new bands, including high-end Hermes models that range from $339 to $689 in the US. New Nike+ and Nike Sport bands will be available for $49. New nylon bands cost $49, and new leather bands go for $149.

The new sport bands come in pebble, azure and camellia. The new nylon bands include, orange, red, berry and midnight blue. The new leather ones include saddle brown, taupe and sapphire.

iPhone 7 and 7 Plus owners have six new options for phone cases from Apple, which match the colors of new watch bands. The cases come in silicone or leather, starting at $35 for the former and $45 for the latter. These cases are available now on Apple’s US website.

Kindle for iOS finally gets the “Send to Kindle” feature, challenging Pocket and Instapaper