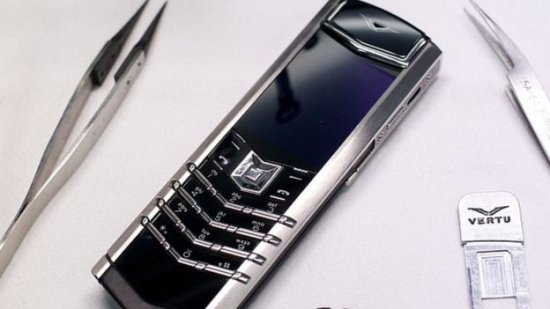 A British-based company that made smartphones costing thousands of pounds will be liquidated after a plan to save it failed.

Vertu was known for its high-end, jewel-encrusted handsets, but recently faced financial difficulties.

The company’s liquidation will result in the loss of nearly 200 jobs.

One technology analyst said Vertu would have faced competition from companies offering to customise other smartphones with precious materials.

When contacted by the BBC, an external spokesman for the firm said: “Well it’s gone into liquidation and I’m not being paid by them any more.”

In March, the company was sold by its former Chinese owner to Hakan Uzan, a Turkish exile in Paris.

The Daily Telegraph reports that he had planned to pay £1.9m to bring the company out of administration, but it had an accounting deficit of £128m.

Mr Uzan will retain the Vertu brand, technology and licenses.

“It is very unusual, they hand make the phone at incredibly low volumes and they were incredibly high-priced,” said Ian Fogg, an analyst at IHS Technology.

He pointed out that some of Vertu’s recent phones had used synthetic sapphire for its screens – something that Apple had considered for its iPhones but later abandoned because of production issues.

“It is a difficult material to work with,” Mr Fogg told the BBC. “One practical benefit is that the smartphone screen is made incredibly difficult to break.”

He also pointed out that other businesses that offered to customise consumer smartphones with precious stones or metals offered an alternative.

That meant that wealthy customers could choose the handset they wanted but add the desired “bling” later.

Vertu was founded by Nokia in 1998, but it was sold in 2012, and the following year Vertu switched from using Nokia’s Symbian operating system on its devices to Google’s Android.

Related Topics:TechVertu phones
Up Next

The coming battle over ‘net neutrality’