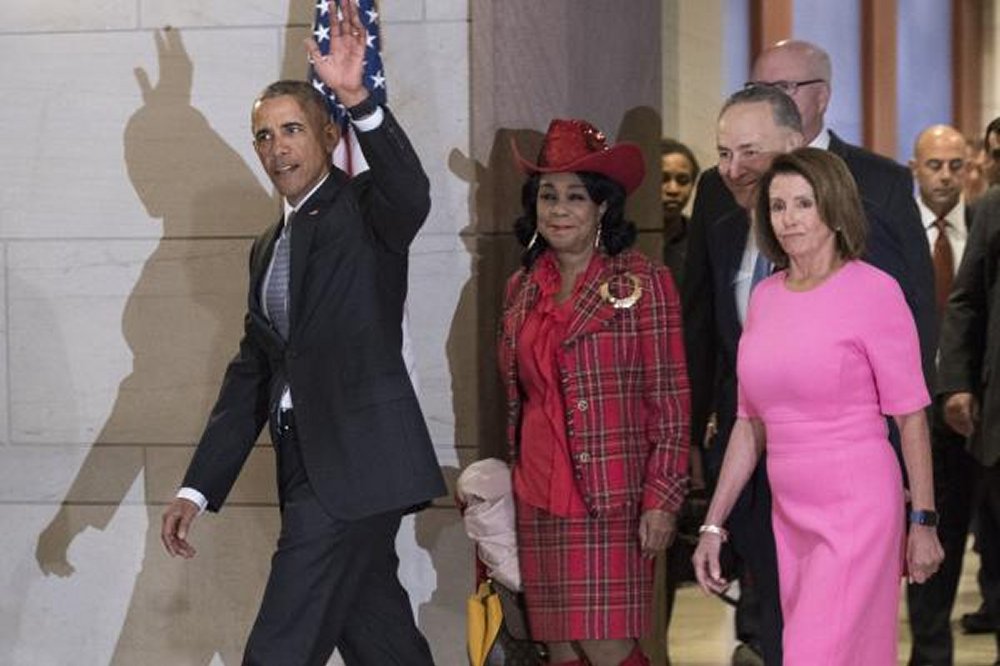 President Barack Obama made a personal plea Wednesday to Democrats on Capitol Hill: “Don’t rescue” the Republicans in their hopes to repeal and replace Obamacare.

And he told the Democrats to start referring to the GOP’s new plan as “Trumpcare” as they try to figure out how to scrap the Affordable Care Act with a new plan.

Just 16 days before he leaves office, Trump visited the Democratic legislators with a mandate to save his healthcare reform law. He was described to CNN by one legislator as “fired up.”

And Trump chimed in on Twitter: “Republicans must be careful in that the Dems own the failed ObamaCare disaster, with its poor coverage and massive premium increases. … deductibles are so high that it is practically useless. Don’t let the Schumer clowns out of this web. … massive increases of ObamaCare will take place this year and Dems are to blame for the mess. It will fall of its own weight – be careful!”

Less than half an hour later, Schumer tweeted: “Republicans should stop clowning around with America’s health care. Don’t #MakeAmericaSickAgain.”

Obama described the benefits of the Affordable Care Act to the legislators, according to Rep. Maxine Waters. He noted he has received countless letters thanking him for Obamacare.

“In two weeks I will no longer be a politician, but I’ll still be a citizen. I envy you so much right now, because I would love to be on the field,” Obama said, according to another member also interviewed by CNN.

Obama took no questions from reporters.

Republicans said Pence’s meeting felt like a “pep rally” but not many policy details were mentioned. GOP Rep. Chris Collins told CNN the party is hoping to craft a replacement proposal in six months.

Pence told reporters after his meeting that he and Trump would pursue a “two-track approach” of executive powers and legislation regarding for an “orderly transition to take place.”

“Make no mistake about it,” Pence said. “We’re going to keep our promise to the American people — we’re going to repeal Obamacare and replace it with solutions that lower the cost of health insurance without growing the size of government.”

Appearing alongside GOP leaders, including House Speaker Paul Ryan, Pence said: “The reality is that I was here in March of 2010 in another capacity [House member] when Obamacare was signed into law. I remember all those promises. We were told that if you like your doctor, you can keep it. Not true.”

In the past, Obama has sought out ideas from Republicans on how to improve Obamacare.

“The president has long been open to the idea that if there are Republicans who are genuinely interested in reforming the Affordable Care Act in a way that would strengthen the program, the president would be strongly supportive of that effort,” White House press secretary Josh Earnest said Tuesday in a briefing with reporters. “But that’s not what Republicans have.”

The Department of Health and Human Services said last month that 6.4 million people purchased health insurance through the federal exchanges during the 2016 open enrollment period, an increase of 400,000 people over last year.

The 2016 total enrollment numbers are roughly 12.7 million in the marketplace, and 20 million total between the ACA between the Marketplace, Medicaid expansion, young adults staying on their parents plan, and other coverage provisions.

Charleston church shooter Dylann Roof: ‘I do not regret what I did’