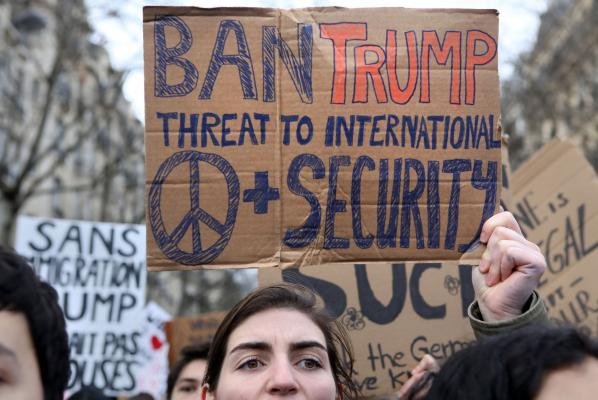 The United States Court of Appeals for the Ninth Circuit, located in San Francisco, ordered the plaintiffs in the case — the states of Washington and Minnesota — to file their briefs before midnight Sunday, California time, while a reply from the Trump administration is due Monday before making a final decision.

Two judges — William Canby Jr. and Michelle Friedland — made the order early Sunday morning, upholding the stay of U.S. District Court Judge James Robart’s, which was issued on Friday night. Richard Clifton, a George W. Bush appointee, was not listed on the order but a 9th Circuit spokesman said he would also weigh in. Friedland is a Barack Obama appointee and Canby was chosen by Jimmy Carter.

For now, Robart’s ruling remains in place. Citizens from seven predominantly Muslim nations — Iran, Iraq, Libya, Somalia, Sudan, Syria and Yemen — had been barred from entering the United States for 90 days by an executive order signed by the president on Jan. 27. Also, the order suspended all refugees to the United States for 120 days and indefinitely from Syria.

The Justice Department filed an appeal before midnight Sunday of the ruling by Robart, an appointee of George W. Bush sitting in the Western District of Washington.

The appeals motion, signed by acting Solicitor General Noel Francisco and acting Civil Division Chief Chad Readler, argued the president has “the unreviewable authority to suspend the admission of any class of aliens” and that halting the ban “harms the public.”

“Judicial second-guessing of the president’s determination that a temporary suspension of entry of certain classes of aliens was necessary at this time to protect national security would constitute an impermissible intrusion on the political branches’ plenary constitutional authority over foreign affairs, national security and immigration,” the Justice Department wrote.

The motion rejected the states’ argument that Trump’s order violates the Constitution by discriminating against Muslims. “It does not favor Christian refugees at the expense of Muslims, but rather is neutral with respect to religion,” Justice Department lawyers wrote.

The Justice Department also argued that the states lack standing in the suit because they’re not directly affected by the president’s order. States have contended the order has a direct impact on residents, businesses and education system.

After the Ninth Circuit’s decision, a U.S. Embassy official in Baghdad said holders of valid U.S. visas, including Iraqi Special Immigrant Visas, can travel to the United States.

Before the appeals decision, the Department of Homeland Security announced it had suspended “any and all” actions to implement the immigration order and would resume standard inspections of travelers.

The State Department said about 60,000 visas were revoked since the order.

In a Twitter post on Saturday, Trump predicted: “The opinion of this so-called judge, which essentially takes law-enforcement away from our country, is ridiculous and will be overturned!”

Asked at a gala in Palm Beach, Fla., on Saturday night whether he was confident his administration would prevail in the appeal, he replied, “We’ll win. For the safety of the country, we’ll win.”

The event took place at Mar-a-Lago, his Florida resort where he is staying over the weekend. It was the first night he wasn’t at the White House since he became president on Jan. 20.

Several thousand protesters marched from Trump Plaza condominiums to within 25 yards of the resort. About 30 Trump supporters gathered nearby.

Several thousand people demonstrated against the executive order outside the U.S. embassy in London. In Paris, around 1,000 protesters marched against the ban near the Eiffel Tower.

Related Topics:Donald Trump's banU.S
Up Next