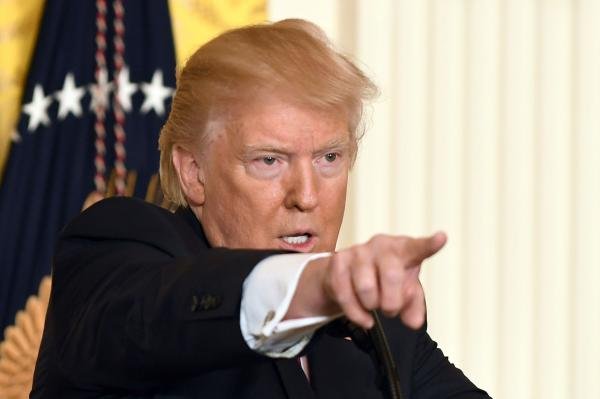 The president reiterated what spokesman Sean Spicer said earlier this week about Flynn’s ouster, saying he asked for his resignation because the retired Army general could not recall the details of a conversation he had with Russia’s top U.S. diplomat, Sergey I. Kislyak, when discussing it later with Vice President Mike Pence.

Specifically, Flynn could not recall whether he had spoken to Kislyak about potential sanctions that were being considered by Barack Obama’s administration.

“I fired him because of what he said to Mike Pence. Very simple,” Trump said. “Mike was doing his job. He was calling countries and his counterparts.”

Flynn was criticized for his communications with Kislyak, which occurred before he was national security adviser — particularly for bringing up the sanctions. Some critics have said such a disclosure would have been inappropriate and possibly illegal.

The White House said a review looked into that question and found no wrongdoing on Flynn’s part.

Trump’s briefing included a blistering critique of the news media as irresponsible and untruthful.

“The news is fake because so much of the news is fake,” Trump said, responding to a question about allegations that members of his campaign staff had communicated with Russian intelligence officers before the election.

“I don’t mind bad stories. I can handle a bad story better than anybody as long as it’s true,” he added. “I’ll make mistakes and you’ll write badly and I’m OK with that. But I’m not OK when it is fake. I mean, I watch CNN, it’s so much anger and hatred.

“I’m really not a bad person.”

Republican and Democratic lawmakers in recent months have called for a look into purported ties between Trump and Moscow.

“Russia is a ruse. I have nothing to do with Russia,” he said. “[I] haven’t made a phone call to Russia in years. Don’t speak to people from Russia. Not that I wouldn’t. I just have nobody to speak to.

“I have nothing to do with Russia. To the best of my knowledge no person that I deal with does.”

The president also briefly addressed his controversial plan to temporarily deny U.S. entry for certain immigrants and refugees, saying an executive action is coming next week to replace the old order.

The action, which barred U.S. travel for refugees worldwide and immigrants from seven largely Muslim nations, has been blocked in federal court.

“The new order is going to be very much tailored to what I consider to be a bad [court] decision,” Trump said. “We had a very smooth rollout of the travel ban. But we had a bad court. Got a bad decision.”

Opponents of the order claim that it’s a thinly-veiled attempt to make good on a campaign remark to keep Muslims out of the United States. Trump, though, has repeatedly countered that it’s a national security measure.

Trump accused U.S. news outlets of having a personal agenda against him, saying they have been far kinder to Democrats like Obama and Hillary Clinton.

Still, there were some lighthearted moments.

During one exchange with CNN’s Jim Acosta, he quipped that he had to do a double-take before going forward with Alex Acosta as his new labor secretary nominee.

“I looked at that name. I said, wait a minute, is there any relation there?” Trump joked. “I said, ‘Do me a favor, go back and check the family tree.'”

The president also noted that first lady Melania Trump and his young son, Baron, would be moving into the White House in the coming weeks.

At least 20 dead after floods in India’s Kerala