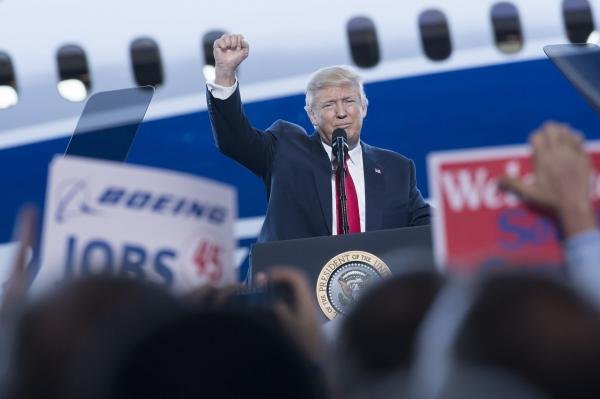 President Donald Trump visited a Boeing production facility in South Carolina on Friday afternoon where the aviation giant showcased the latest version of its 787 Dreamliner.

“That is one beautiful airplane,” the president said in his opening remarks, gesturing to a 787 on display behind him. “Congratulations to the men and women here who have built it.”

The president’s visit was part of an unveiling by the Chicago-based aerospace company of its new 787-10 — the third and most recent version of the widebody jet, which is more fuel efficient than Boeing’s other planes due to the airframe’s largely composite structure.

“The name says it all — Dreamliner. Great name,” he added. “Our country is all about making dreams come true.”

Trump’s venture to South Carolina is his first visit to a manufacturing plant since he was sworn in as president. He made the trip to underscore his plans to develop a robust American job market and reduce outsourcing of labor.

Trump touted his economic vision and repeated that the American people will be “very, very happy.”

“As president I’m going to do everything I can to unleash the power of the American spirit and put people back to work,” the president said. “This is our mantra — buy American and hire American.”

Trump cited the Dakota Access Pipeline as an example of his work to boost the domestic economy — saying he mandated that the steel for the pipeline come from the United States.

“I said, ‘where is the pipe made?’ And they told me, ‘not here,'” Trump said. “I said, ‘good, add a little sentence that you have to buy American steel.'”

Trump’s visit came just two days after workers at the North Charleston plant voted against organizing. An election was held Wednesday for 3,100 workers to decide whether to join the International Association of Machinists and Aerospace Workers. Boeing advised against the option and workers ultimately did, as well.

Trump also said Friday that the United States will begin “winning like never, ever before” and praised the people of South Carolina for voting for him in November.

“You know, the old days when I made this speech I got paid a lot of money. Now I’ve got to do it for free,” he quipped. “Not a good deal, but that’s OK. We love it.”

Historians rank Obama at No. 12 in survey of greatest U.S. presidents