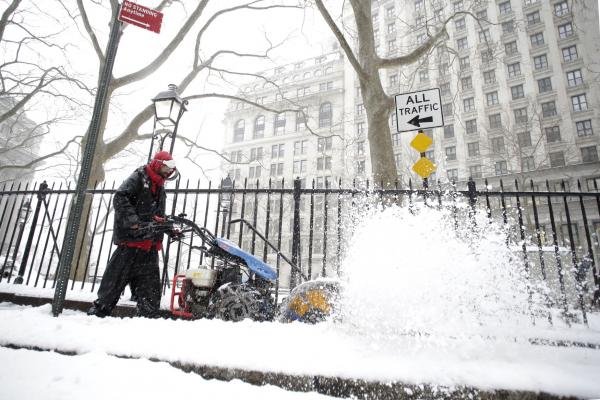 A late-season storm dumped up to 30 inches of snow in some parts of the Northeast and killed at least five people, local officials said.

Heavy snowfall in the United States and Canada made travel and other outdoor activities dangerous Tuesday.

Two men, ages 76 and 64, died while operating a snowblower and shoveling in separate incidents in Wisconsin. Investigator Jenni Penn said both deaths were cardiac-related.

The 16-year-old daughter of a Gilford police dispatcher in Wisconsin died in a weather-related car crash; officials said the town was experiencing whiteout conditions.

A snow plow driver was killed after colliding with an Amtrak snow-plowing train while it crossed the tracks to clear 12 to 15 inches of snowfall in Massachusetts.

A Canadian died from injuries sustained in a car crash after a multi-car pileup occurred on an Ottawa highway, causing a chemical spill that sent several people to the hospital for chemical contact.

While the snowfall is no longer a concern along coastal areas, Tuesday’s storm caused ocean water to flood into streets in some parts of New Jersey and New York. The New Jersey town of Sea Bright saw up to 17 inches of water, and some people needed to be rescued from rising water in Atlantic City.

In Brooklyn, at least 1 inch of water accumulated and flooding was also reported on Long Island.

Officials said flooding would continue to be a concern as accumulated snow melts over the coming days.

The extreme weather caused several states to issue bans on travel leading to nearly 9,000 flight cancellations throughout the week with more than 6,000 on Tuesday.

Parts of upstate New York recorded up to 30 inches of snow while areas such as Connecticut, Maine, Vermont and Massachusetts had up to 20 inches.

Major U.S. cities including New York, Philadelphia and Washington, D.C., escaped the brunt of the storm as it tracked farther to the northwest.

Snow forecasts in Philadelphia were lowered to between 2 and 4 inches and 4 to 8 inches in New York and Boston, although dangerous weather conditions still persisted in those areas.

“This isn’t what we expected. We expected up to 18 inches of snow,” Boston Mayor Martin Walsh said. “We have less snow on the ground [than expected], but the conditions are as if we are getting 20 inches of snow. The snow is coming down sideways, so it’s still a dangerous storm.”

The storm knocked out power to hundreds of thousands of customers across the region and Amtrak canceled service to many locations.

GOP plan would insure 24M fewer in U.S. than ACA over decade: CBO