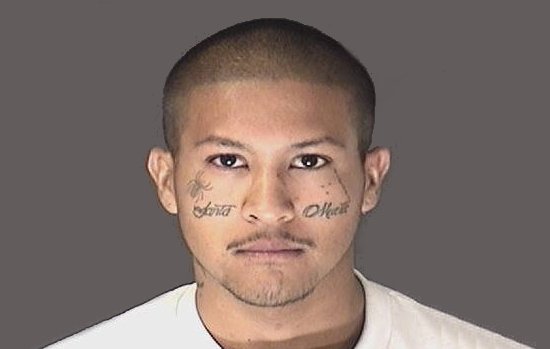 A man is under arrest in connection with the deaths of two teenagers whose bodies were found on the shoulder of a rural Colorado road.

Gustavo Marquez, 19, was arrested Sunday and was being held in jail Tuesday on suspicion of first-degree murder, kidnapping, aggravated robbery and child abuse resulting in death.

The bodies of Derek Benjamin Greer, 15, and Natalie Partida, 16, were found March 12 by a passing driver about 20 miles south of Colorado Springs near Pikes Peak International Raceway.

Authorities haven’t said how the teens died except to say they were killed and they haven’t released any details about a possible motive or a connection between Marquez and the two teens.

The arrest affidavit in the case is sealed.

Court records show Marquez was charged with assault and kidnapping in February in nearby Fountain. His public defender in that case didn’t return a call seeking comment on his behalf.

His mug shot shows that Marquez has a tattoo across his face that says “Santa Muerte” — “Holy Death” in Spanish — a skeleton folk saint often associated with violence and drug trafficking but also has a following among a variety of people, including the poor, artists and immigrant small business owners.