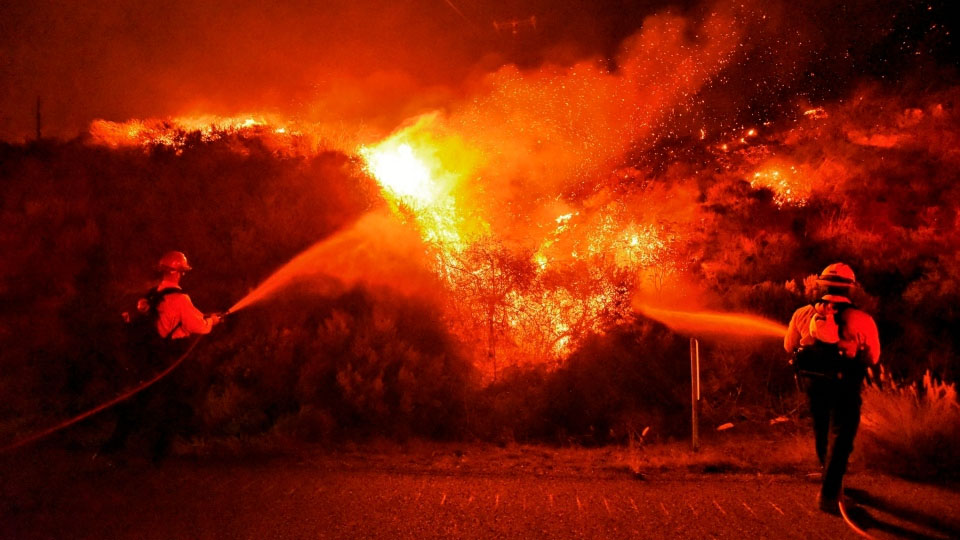 A major highway in Southern California coastal mountains remained closed Wednesday and evacuation orders were in place as a growing wildfire chewed through dry vegetation in the region.

The fire was burning near Rancho del Cielo, which was once owned by Ronald and Nancy Reagan and was known as the Western White House during his presidency. Fire crews were protecting the ranch where Reagan hosted world leaders.

The fire erupted Monday on a ridge and swept toward the ocean, forcing the closure of U.S. 101, the only major highway on that section of the coast. Evacuation orders and warnings were in place for ranches and several rural communities.

While the area is lightly populated, the blaze burning in dense chaparral threatened more than 100 homes, ranches and other buildings, fire officials said.

The Santa Barbara County Board of Supervisors declared a local emergency on Tuesday and asked Gov. Gavin Newsom to declare a state of emergency to free up more state resources for firefighters and evacuees.

In Northern California, fire crews increased containment of a blaze that destroyed 25 mobile homes, 16 RVs and a park building at the Rancho Marina RV Park in Sacramento County.

No injuries were reported, and the cause remained under investigation.

To the south in San Joaquin County, a man suffered severe third-degree burns over most of his body and about five mobile homes were damaged by flames that raced through the Islander Mobile Home Park, Lathrop-Manteca Fire Chief Josh Capper told Fox40-TV.

Powerful gusts swept across the state Monday, toppling trees and whipping up blinding dust clouds. The Pacific Gas & Electric utility shut off power Monday to about 24,000 customers in targeted areas of 23 counties to prevent fires from being started if gusts damaged electrical equipment.

The windy weather then settled down somewhat and power was restored Tuesday, but red flag warnings for extreme fire danger will return Thursday and PG&E warned that it may need to cut power to about 29,000 customers across 19 counties on Thursday because of the renewed threat.

PG&E equipment was blamed for a 2018 fire that wiped out most of the town of Paradise in Butte County. The company filed for bankruptcy and pleaded guilty to 84 counts of involuntary manslaughter. PG&E also faces criminal charges for fires caused by its fraying equipment, including involuntary manslaughter counts after a blaze near Redding last year killed four.

A historic drought in the American West tied to climate change is making wildfires harder to fight. It has killed millions of trees in California alone. Scientists say climate change has made the West much warmer and drier in the past 30 years and will continue to make weather more extreme and wildfires more frequent and destructive.

Windy weather is a nightmare for firefighters in a state where heat waves and historic drought have left forests and brush tinder-dry. Fires that began in late summer are still burning after destroying hundreds of homes.

Gabby Petito’s cause of death was strangulation, coroner says