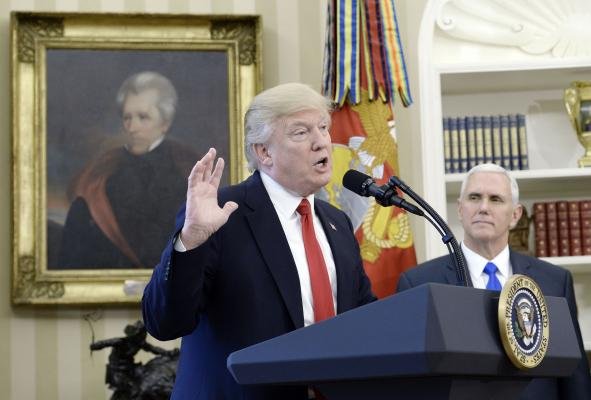 President Donald Trump signed two executive orders on trade Friday — one dealing with a review of the U.S. trade deficit and another to strengthen anti-dumping rules and enforcement.

The deficit review will examine forms of “trade abuse,” taking a country-by-country look over 90 days at cheating, lax enforcement and currency misalignment. The president said the order ensures “that we fully collect all duties imposed on foreign importers that cheat, the cheaters.”

Regarding anti-dumping and countervailing, the order directs Homeland Security Secretary John F. Kelly, in consultation with the secretaries of the Commerce and Treasury departments, to ensure enforcement.

“Those who break the rules will face the consequences, and they will be very severe consequences,” Trump said at a White House news conference Friday.

“Dumping” occurs when countries export a product at a lower price than it would be sold for at home. The World Trade Association allows countries to charge countervailing duties on subsidized products that the country finds hurt its domestic imports.

“Nobody has ever made bad trade deals like our country has made,” Trump continued, adding that results from his orders will be seen quickly and will build on accomplishments his administration has made in recent weeks.

In his remarks, Trump cited a recent survey showing a rise in optimism across the manufacturing industry and said his new orders are part of his follow-through on a campaign promise to bring back American jobs.

“I promised them action and I promised them a solution,” the president said. “These voiceless Americans now have a voice in the White House … we are going to create a level playing field for the American worker, finally.”

“From a policy point of view, it really goes like a laser at a problem and it solves it quickly, one that’s been going on for 15 years,” National Trade Council leader Peter Navarro said.

The deficit review will be led by Commerce Secretary Wilbur L. Ross, Jr.

“If anyone had any doubt about the president’s resolve to fix the trade problems, these two executive orders should end that speculation now and for all time,” Ross said in remarks after Trump’s.

The orders were signed one week before Chinese President Xi Jinping is set to visit Trump’s estate in Palm Beach, Fla., which Trump calls the “Southern White House,” where the leaders are expected to discuss trade.

Navarro has said China is a primary source of steel dumping in the United States, accounting for about one-third of the cases.

The orders are not specifically aimed at China, according to officials, but Ross noted that China is the number one source of the U.S. trade deficit, which was $347 billion last year.

Thursday, Trump took to Twitter to say the meeting with the Chinese leader will be “a very difficult one.” Also this week, he released a draft outline of plans to renegotiate the Bill Clinton-era North American Free Trade Agreement — and promised the results would be substantial.

“I am not beholden to any political or financial interest, I don’t care,” Trump said Friday. “I’m not thinking about my business or anybody’s business.”

“The American worker is my north star,” he added. “We have a team second to none … you’re going to see some very strong results very, very quickly.

“I work for the American people — whether you’re a Democrat or a Republican, or belong to no party at all — you are an American and I am here to represent you and your family. We are going to get this thing straightened out.”