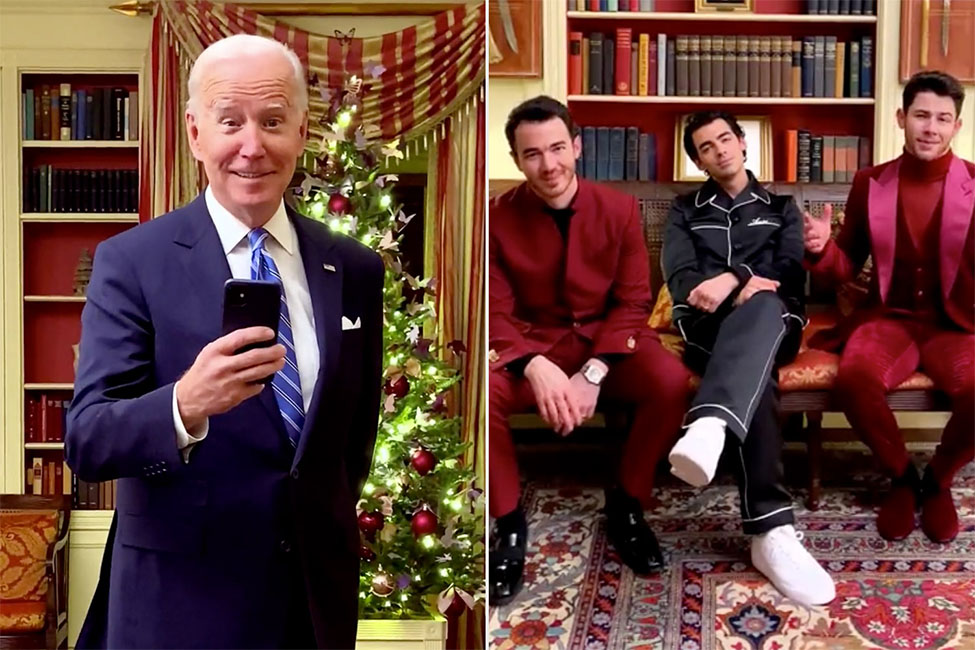 The Jonas Brothers paid a special visit to the White House on Friday — and used the viral “bing bong!” TikTok sound to encourage vaccinations in the United States. Ther special guest? None other than President Joe Biden. (Or should we say, Joe Byron?)

The silly video starts with Joe Jonas (in a pajama-looking outfit) going “bing bong!” before Nick (sporting a magenta suit) mouths, “Are you vaccinated?” Then, Kevin (seen matching with Nick in magenta) pops out of a box and says, “Yes sir!”

Then, the climax: Joe, 32, asks, “What do you want to tell Joe Biden right now?” Kevin and Nick take turns with the viral reply: “What’s up baby! Take me out to dinner.”

The video ends without the viral sound as Kevin asks their cameraman, “Did we get it?” Behind the viral video? Biden, 79, himself.

“You got it!” the president replies.

The silly 17-second clip was shared by Karine Jean-Pierre, the deputy press secretary at the White House, and Nick with the caption, “Dinner plans @POTUS?” The JoBros shared it, writing “EYYY YOOO,” while Joe reposted it with the caption: “BING BONG.”

The video, which collected over 2 million views on TikTok in less than an hour, is the White House’s latest push to promote vaccinations as the omicron variant of COVID-19 roils the U.S.

On Thursday, a doctor speaking on Today shared that vaccinated people are likely to test positive for the virus. As of Friday, there have been more than 50.4 million positive COVID cases in the U.S. since the start of the pandemic, according to the New York Times.

“We have to get comfortable with fully vaccinated folks testing positive, that’s going to be our new normal,” Dr. Vin Gupta told the Today show hosts. “But people should not worry about that because the purpose of vaccines is not to prevent a positive test or a respiratory virus like omicron, it’s to keep you out of the hospital, and that’s exactly what they’re doing.”

As for the TikTok sound, it features the voice of TJ, a man who has gone viral for his hilarious interview responses on Coney Island in New York. Earlier this month, Lil Nas X used the audio of one of the videos featuring TJ (known by many as “Byron” for his misnaming of the president) at the Variety Hitmakers Brunch.

In Lil Nas’ star-studded spoof, the “Call Me Your Name” rapper passed the camera to Olivia Rodrigo, Jack Harlow, Normani, Anitta, Tinashe, Avril Lavigne and Chloe Bailey as they voiced over the “Bing Bong” bit from TikTok’s sidetalknyc.

The new video also comes after TikTok users raised more than $35,000 for TJ. In early December, a TikToker spotted him in public, where she shared that he was living on the street. She then started a GoFundMe to raise money for him.

“Tj is a homeless man trying to get his life together and off the streets. This will help him get inside and warm place to sleep at night and food to eat. He is sober he just needs a little push,” the GoFundMe’s description read.