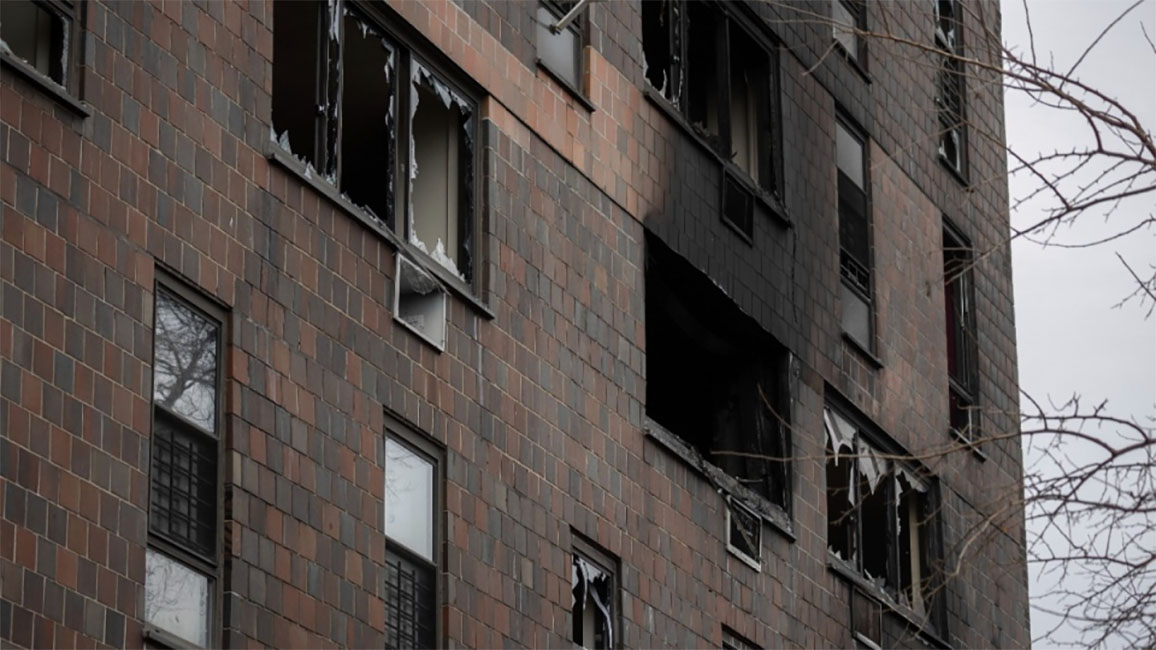 NEW YORK — Sorrow welled across a Bronx community Monday, a day a fire and choking smoke engulfed a high-rise apartment building and claimed the lives of 17 people, eight of them children.

As survivors recalled the frantic chaos of their escape, bereft family and friends of those who perished coped with shock, disbelief and pain.

“Some people don’t even know that their loved ones are gone,” said Fathia Touray, speaking to The Associated Press from her home in the United Arab Emirates. Her mother and siblings lived on the building’s third floor, where the fire started. One sister was rushed to a hospital, but is now in stable condition. The rest of her immediate family escaped.

Renee Howard, 68, became emotional as she spoke about the lives lost.

“I don’t remember all their names right now,” she said, before rattling off a few, including one boy who she described as having “such beautiful angelic eyes.”

All those lives, she said, were “snatched away in a second.”

She joined other residents, surviving family and strangers alike in prayer Monday to console the grieving.

At Masjid-ur-Rahmah, a mosque just a few blocks from the apartment building, more than two dozen people came together in solidarity. Many of those who pray at the mosque live in the building.

About a dozen women wept inside the mosque, mourning the loss of three young children in the fire. Members of the congregation weren’t sure about whether the children’s parents’ survived, and many family members feared the worst.

“To God we belong and to God we return,” said the mosque’s imam, Musa Kabba, who urged congregants to be patient while awaiting news about loved ones.

Many who lived at the apartment complex had formed a close-knit community, and soon word spread about who might have died amid the smoke and fire.

“I’m so sorry for the people that lost their children and their mothers because we all are one. And for this to happen, it’s horrible,” said Tysena Jacobs, a building resident.

Mahamadou Toure struggled to find the words outside a hospital emergency room, hours after the fire took the life of his 5-year-old daughter and her teenage brother.

“Right now my heart is very…” Toure tried to tell the Daily News, before composing himself.

Neighbourhood residents, Johanna Bellevue among them, donated clothes and other necessities to survivors.

“Baby clothes, baby food, books, jackets, sneakers, whatever I can just given out whenever I can,” Bellevue said. “I can’t do much but what I have.”

At an assistance centre set up at Monroe College, Stefan Beauvogui and his wife went through rooms of clothes and household goods.

Beauvogui has lived in the building for about seven years, he said. He and his wife were in their apartment on the 4th floor along with their 6- and 9-year-old sons when his wife smelled smoke Sunday morning, he said.

His family were waiting Monday to be let back into their apartment to see the extent of damage.

“The city stands ready to give impacted families all the support they need,” Adams said.

Many of those displaced were immigrants from the West African nation of Gambia.

“This is a very close-knit community,” said Touray, who lived in the building herself for many years and has kept close contact with family and friends in the United States despite moving to the United Arab Emirates.

Her family moved to the building nearly four decades ago. Soon, others from Gambia, some from the same village as her own, would arrive. Over the years, they formed a community in one enclave of the Bronx.

“These are working class, first-generation immigrant families surviving,” she said, “and just trying to thrive in the U.S.”

“We’ve lost a lot of close family friends,” said Touray, who said she expected to fly back to the United States to be with family.

No jab, no job: Citigroup to fire unvaccinated staff this month