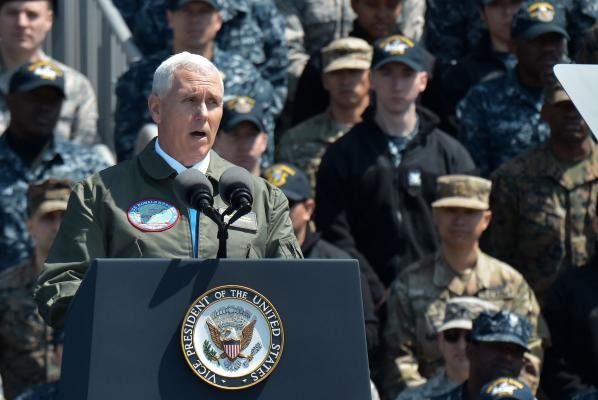 U.S. Vice President Mike Pence vowed to strike back in the event of a North Korea attack against Japan.

Speaking on the flight deck of the aircraft carrier USS Ronald Reagan at the naval base in Yokosuka, Pence said Wednesday any military provocation would be met with an “effective American response,” The Japan Times reported.

“We will defeat any attack, and meet any use of conventional or nuclear weapons with an overwhelming and effective American response,” Pence said.

The vice president also said North Korea is the most dangerous threat in the Asia-Pacific region and that the era of strategic patience was over, Kyodo news agency reported.

Pence had met earlier with Japanese Prime Minister Shinzo Abe and affirmed the United States, like Japan, seeks to achieve peace but that peace is possible through force and strength, the Japanese news agency reported.

North Korea’s most recent missile launch, which ended in failure, was most likely a test of a KN-17 Scud missile, Fox News reported.

The missile is probably a single-stage, liquid-fueled anti-ship projectile that was on display during Pyongyang’s military parade on Saturday, according to the report.

The vice president is also in Tokyo to renew trade talks that began with the first summit between U.S. President Donald Trump and Abe.

Pence said Wednesday that U.S. exporters could achieve a higher level of market access in Japan, adding the United States seeks a balanced trade relationship with the world’s third-largest economy, according to Kyodo.

Pence said dialogue could lead to a bilateral free trade agreement, a move that is favored by U.S. business leaders, including beef exporters.