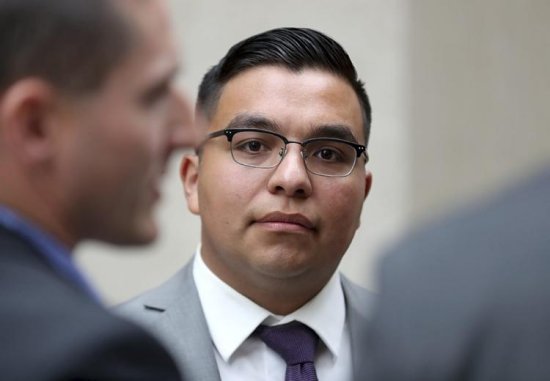 A police officer who controversially shot and killed a Minneapolis area man last year during a traffic stop was acquitted of three felony criminal charges Friday.

Jurors found St. Anthony Police officer Jeronimo Yanez not guilty in the death of Philando Castile, which attracted national attention and was nearly fully documented on video by the man’s girlfriend.

The jury delivered its verdict after 27 hours of deliberation.

Yanez, 29, had faced one count of second-degree manslaughter and two counts of reckless discharge of a firearm in Castile’s death. The firearms charges were leveled because Castile’s girlfriend and her 4-year-old daughter were in the car, although neither was hurt.

Before announcing its verdict Friday, the jury requested to hear Yanez’s entire testimony — which the judge denied. Requests to re-hear testimony are often refused out of fear that too much emphasis on one witness’ words could unfairly influence the jury.

Yanez shot Castile, 32, in the passenger seat of his vehicle after it was stopped on July 6, 2016. At trial, the officer testified that he feared for his life because Castile had reached for his handgun when he’d been ordered not to.

Yanez had been facing up to 10 years in prison in the case.