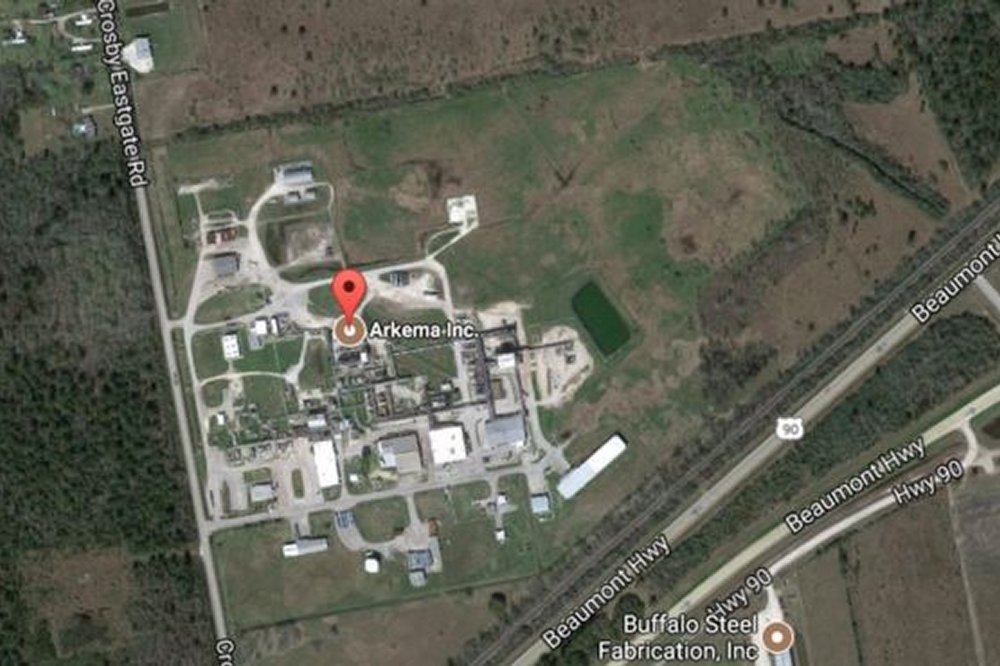 Explosions have been heard coming from a chemical plant near the flooded US city of Houston.

During heavy rainfall from Hurricane Harvey, the complex lost the ability to refrigerate chemical compounds that need to be kept cool.

There was no way to prevent an explosion, the company had warned earlier.

Ahead of the explosions, one police officer who was helping secure the site was taken to hospital after inhaling fumes, while others admitted themselves to hospital as a precaution.

In a statement, the company said: “At approximately 2am CDT [07:00 GMT], we were notified by the Harris County Emergency Operations Center of two explosions and black smoke coming from the Arkema Inc plant in Crosby, Texas.

“Local officials had previously established an evacuation zone in an area 1.5 miles from our plant, based on their assessment of the situation.

“We want local residents to be aware that product is stored in multiple locations on the site, and a threat of additional explosion remains. Please do not return to the area within the evacuation zone until local emergency response authorities announce it is safe to do so.”

At least 33 people have been killed in eastern Texas in the aftermath of the storm, which the US National Weather Service has now downgraded to a tropical depression.

Heavy rainfall is expected from Louisiana to Kentucky over the next three days, and flood warnings remain in effect for south-east Texas and parts of south-west Louisiana.

US energy supplies have been hit, as oil companies shut down refineries and a major pipeline in the Houston area.

Firefighters will begin a door-to-door search of badly flooded areas of Houston on Thursday, to rescue survivors who are still stranded and recover the bodies of those who have died.

“We’ll be doing block-by-block, door-by-door search of streets… to make sure there are no people we’ve left behind,” Richard Mann, the city’s assistant fire chief, was quoted as saying by the Houston Chronicle newspaper.

“This will be a one- to two-week-long process to make sure we address all those areas that have been… most impacted.”

The Arkema chemical plant, 21 miles (34km) from Houston, shut down its production on Friday, before the storm made landfall.

But 40in (102cm) of rainfall in the area flooded the site and cut off its power, the company said in a statement. Back-up generators were also flooded.

The facility manufactures organic peroxides, compounds that are used in everything from making pharmaceuticals to construction materials, which can become dangerous at higher temperatures.

“Any fire will probably resemble a large gasoline fire,” CEO Richard Rowe told Reuters news agency before the reports of explosions. “The fire will be explosive and intense.”

He said the black smoke produced would irritate skin, eyes and lungs.

“The high water that exists on site, and the lack of power, leave us with no way to prevent it.”

The fire is expected to be mostly contained to the site itself but residents have been evacuated in a 1.5 mile radius around the plant as a precaution.

The last remaining workers at the site were evacuated on Tuesday.

The Federal Aviation Administration has issued a temporary ban on flights near the plant.

Parts of Texas have been hit by more than 50in of rainfall since Hurricane Harvey landed on 25 August, setting new records before it was downgraded to a tropical storm and, late on Wednesday, to a tropical depression.

Rescue efforts continued overnight. Thousands of people have been rescued from the floodwaters, and more than 32,000 people are being housed in emergency shelters.

Large parts of Houston, the fourth most populous city in the US, remain under water.

The city is also a key energy hub. The storm and its subsequent flooding has knocked out about a quarter of the country’s refining capacity, sending petrol prices to a two-year high.

The Colonial Pipeline, which carries more than 100 million gallons of petrol, heating oil and aviation fuel between Houston and the East Coast each day, has been shut.

Port Arthur, about 80 miles east of Houston, was also severely flooded. Mayor Derrick Freeman, posting on Facebook, said the entire city was under water, and appealed for anyone who owned a boat to help.

Details of some of those who died in Texas have emerged:

“To those Americans who have lost loved ones, all of America is grieving with you, and our hearts are joined with yours forever,” President Donald Trump said in a speech a day after seeing the effects of the flooding during a trip to Texas.

An additional 10,000 members of the National Guard were said to be on their way to Texas to join the rescue efforts, adding to the 14,000 troops already deployed.

Harvey was the most powerful hurricane to hit Texas in more than 50 years when it first made landfall at Corpus Christi, 220 miles south-west of Houston last week.

At a news conference on Wednesday, Texas Governor Greg Abbott said the state could need more than $125bn (£97bn) from the federal government to help it recover.

And he warned “the worst is not yet over”, as flooding is expected to continue for several days.

Mr Abbott has accepted an offer of aid from the Mexican government, which has suggested it is willing to despatch troops with food, water and medicine – as it did in 2005 when New Orleans was devastated by Hurricane Katrina.

US Secretary of State Rex Tillerson said it was “very generous of Mexico to offer their help at this very, very challenging time for our citizens down in Texas”.

The move comes amid tension between the two countries over President Donald Trump’s repeated promises to build a vast border wall on the southern US border to keep out illegal immigrants and criminals, and to make Mexico pay for it.

In a separate development, Mexico’s Red Cross has sent 33 English-speaking volunteers to Houston to work in shelters in the city.

US tells Russia to close consulate