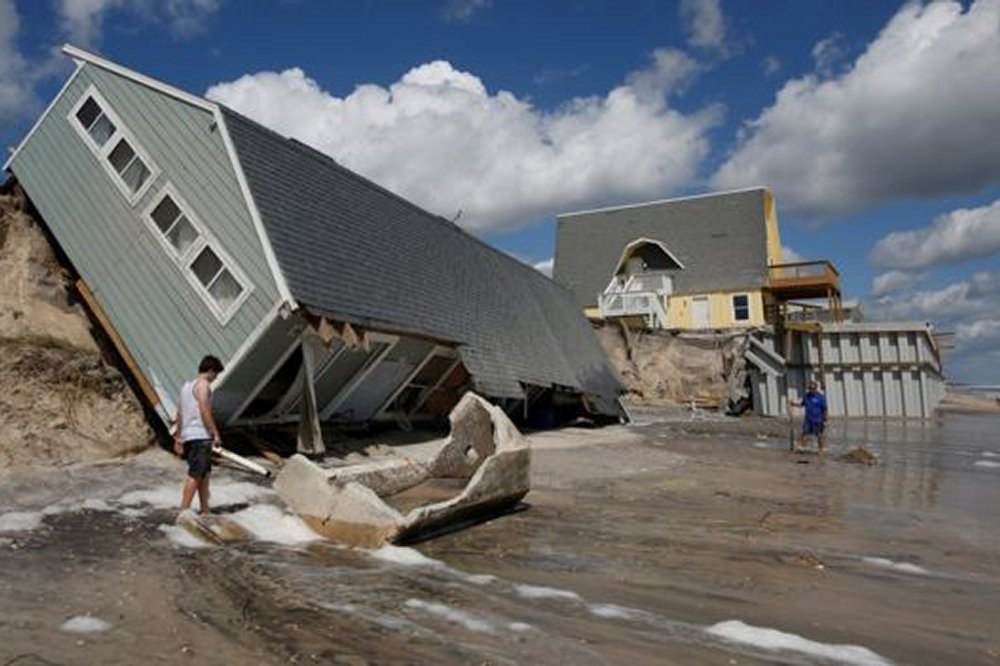 Hurricane Irma evacuees are returning to scenes of devastation in the Florida Keys with reports of a quarter of homes destroyed on the low-lying islands.

The latest images show homes torn apart after the storm pummelled the region with winds of up to 120mph (192km/h).

Search and rescue teams are moving through the worst affected areas with emergency supplies of food and water.

US President Donald Trump will visit Florida on Thursday to view the damage caused as Irma tore through the state.

It will be Mr Trump’s third trip related to hurricanes in two weeks and he will be joined this week by his wife Melania, the first lady.

About 90,000 residents returning to the Florida Keys and Miami Beach have been warned that most fuel stations remain closed and mobile phone signals are patchy.

Some residents were allowed into the towns of Key Largo, Tavernier and Islamorada on Tuesday morning.

“Returning residents should consider that there are limited services. Most areas are still without power and water,” authorities in Monroe Country said.

Irma is being linked to at least 18 deaths in the US since it struck as a category four storm on Sunday, including 12 in Florida.

Parts of the Florida Keys, the low-lying islands which bore the brunt of Hurricane Irma, have since reopened.

But entry is being restricted to residents and business owners as work continues to clear roads and check the state of bridges linking the islands.

Residents have been returning to mobile homes that have been torn apart, boats grounded in the streets and debris piled high after police lifted roadblocks on Tuesday.

“Basically, every house in the Keys was impacted,” he said.

Florida Governor Rick Scott said: “So many areas that you would never have thought have flooded, have flooded.”

The storm earlier left a trail of destruction in the Caribbean, where nearly 40 people were killed.

Many homes in the main town, Road Town, have been badly damaged.

European countries have been boosting relief efforts in their Caribbean territories amid criticism over their response to Hurricane Irma.

French President Emmanuel Macron, who is visiting French islands that took the full force of the storm, said his government had responded with “one of the biggest airlifts since World War Two”.

UK Foreign Minister Boris Johnson is also due to visit the British Virgin Islands and Dutch King Willem-Alexander is touring the Dutch side of St Martin, where at least four people were killed.

“I have seen proper war as well as natural disasters before, but I’ve never seen anything like this,” King Willem-Alexander told Dutch radio on Tuesday.

Irma killed at least 23 people in the three countries’ overseas territories. The victims include 10 on the French island of St Barts and on the French part of St Martin.

Thousands of people ignored calls to evacuate last week, and clung on in the dangerously exposed islands during the storm.

Teams are still working to clear Highway 1, the road connecting most of the inhabited islands, and bridge inspections are continuing.

The US aircraft carrier Abraham Lincoln has arrived off Florida and other navy ships were in the area on Tuesday to help distribute food to the Keys and evacuate residents.

In Jacksonville, Mayor Lenny Curry said 356 people had to be rescued amid record-high storm surges and flooding, the Florida Times-Union reported.

Other parts of the state escaped the storm lightly compared to the Caribbean islands.

“The storm surge flooding in Miami is a mere fraction of what would have happened if the core of the storm had been further east,” Rick Knabb, former director of the National Hurricane Center, said in a tweet.

Another hurricane, Jose, has been weakening over the western Atlantic, with swells due to affect parts of Hispaniola (the island split into Haiti and the Dominican Republic), the Bahamas, and the Turks and Caicos Islands, later this week.