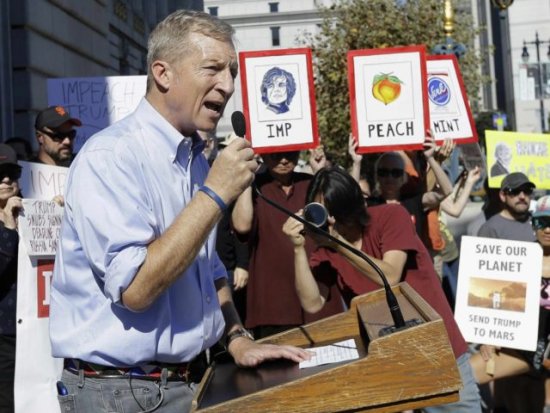 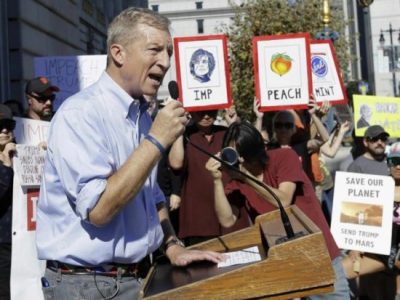 Billionaire Democrat Tom Steyer is telling his party that they need to impeach President Donald Trump right now — and that waiting is a mistake.

“The fact of the matter is that we believe he is dangerous to the American people now,” he told the UK Guardian. “We believe that waiting is a mistake and we believe the events that will occur over the next year will show that we are right.”

Steyer did not specify which events he meant, but presumably it meant further criminal charges stemming from Special Counsel Robert Mueller’s investigation into alleged Russian interference in the 2016 election. Thus far, Mueller has produced two indictments for money laundering prior to the election and other charges, and one guilty plea for lying to the FBI, but no actual evidence of collusion between the Trump campaign and the Russian government.

Steyer has rolled out a $10 million ad campaign pressing Congress to impeach the president — though the grounds for impeachment remain unclear. Under the Constitution, Congress has wide authority to impeach the president, even if he (or she) has not been convicted of a crime. The Constitution’s definition of “high crimes and misdemeanors” is more a term of art than a legal category.

However, Steyer has run into opposition from some fellow Democrats, including House Minority Leader Nancy Pelosi, who fear that campaigning openly to impeach the president will not bring much political benefit, and distracts from more potent political messages on policy issues.

Pelosi reportedly told her Democratic colleagues last week that Steyer’s campaign is a distraction. On Sunday, she told CNN’s State of the Union that impeachment is “not someplace that I think we should go.”

Only a few Democrats have thus far endorsed impeachment as a preferred course of action.

Steer may challenge incumbent Sen. Dianne Feinstein (D-CA), who drew the ire of the left earlier this year when she suggested that Trump might eventually turn out to be a good president.