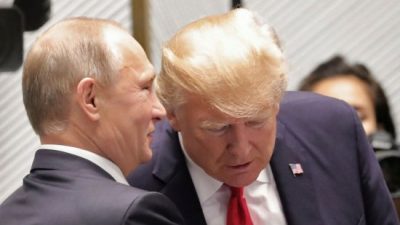 US President Donald Trump said he had “good discussions” with Russian leader Vladimir Putin when they met briefly at an Asia-Pacific summit in Vietnam.

On Twitter, he blasted “haters and fools”, who, he said, do not encourage good relations between the countries.

Earlier he said Mr Putin told him he was insulted by allegations of Russian interference in the 2016 US election.

The US intelligence community has previously concluded that Russia tried to sway the poll in Mr Trump’s favour.

The two leaders had no formal bilateral talks during the Asia-Pacific Economic Co-operation (Apec) event, but meet in passing on three occasions. They spoke about the Syria crisis and the election allegations, according to Mr Trump.

“He said he absolutely did not meddle in our election,” the US president said.

Republican Senator John McCain, a vehement critic of Mr Trump, called him naive for “taking the word of a KGB colonel over that of the American intelligence community”.

When will all the haters and fools out there realize that having a good relationship with Russia is a good thing, not a bad thing. There always playing politics – bad for our country. I want to solve North Korea, Syria, Ukraine, terrorism, and Russia can greatly help!

In his tweets, he also said his predecessor, Barack Obama lacked “chemistry” with President Putin.

The US justice department has appointed special investigator Robert Mueller to examine any possible collusion involving Mr Trump’s team, and legal action has already been taken against several former aides.