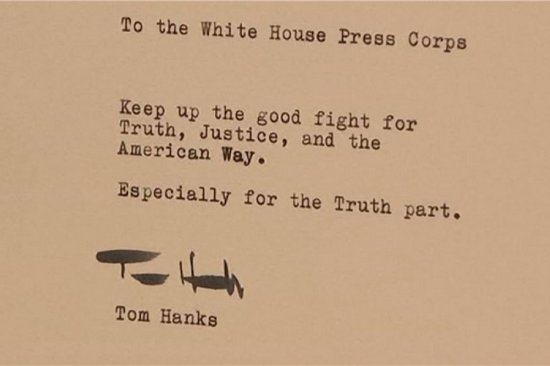 Tom Hanks has given the White House’s caffeine-addled journalists a gift to help them survive late nights reporting on the Trump administration: a new espresso machine.

The US actor’s present was accompanied with an illustration of American troops soldiering on.

Hanks had also bashed out a message using one of the typewriters from his beloved collection, which read: “Keep up the good fight for truth, justice and the American way. Especially for the truth part.”

His gesture comes as the feud between Donald Trump and the media continues to brew, with the President frequently accusing major news organizations of reporting falsehoods and being biased.

Mr Trump recently branded journalists as “the enemy of the American people”.

This is not the first time Hanks has gifted a coffee machine to the White House press corps.

The star first purchased an espresso machine for reporters covering George W Bush’s presidency after he learned they did not have any coffee-making equipment.

Hanks bought another machine for them in 2010 after he discovered the first one had broken.

Last week, the President announced he is going to skip this year’s White House Correspondents’ Association Dinner – a long-standing tradition which dates back to 1921.

The last commander-in-chief to miss the event was Ronald Reagan in 1981. He was unable to attend because he was recovering from being shot during an assassination attempt – but sent along some friendly remarks to be read in his absence.

Richard Nixon, who despised the media, was also a no-show in 1972.

Smartphone app lets you take selfies with your dead