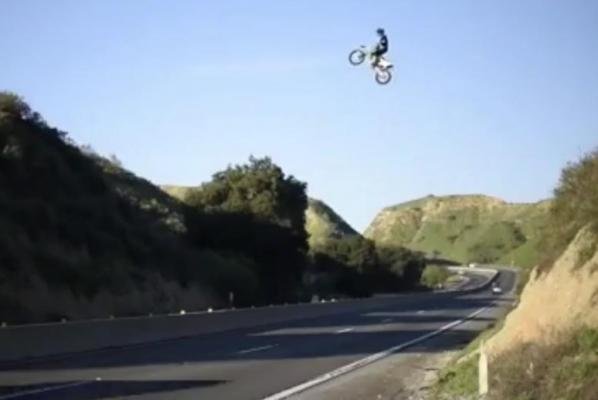 Transportation officials in California said they blocked off a makeshift ramp a dirt biker used to jump over a freeway in a viral video.

A video posted to Instagram Friday by motocross enthusiast Kyle Katsandris, 24, shows a man — not confirmed to be Katsandris — jumping the busy 60 Freeway in Riverside County after building a ramp out of dirt with a team of supporters.

The California Department of Transportation said crews identified the location where the video was recorded and visited to dismantle the ramp and block access to the area to prevent copycats from attempting their own potentially dangerous stunts.

“We want to impress upon people that this was a dangerous stunt and somebody could have lost their life on that highway,” CalTrans spokeswoman Terri Kasinga told the Los Angeles Times. “This could have turned into a tragic situation and we hope never to see this again.”

The California Highway Patrol and Riverside County Sheriff’s Department said investigations into the incident have been opened, but investigators said it is unlikely that anyone will be prosecuted due to the driver’s face being obscured by a helmet.