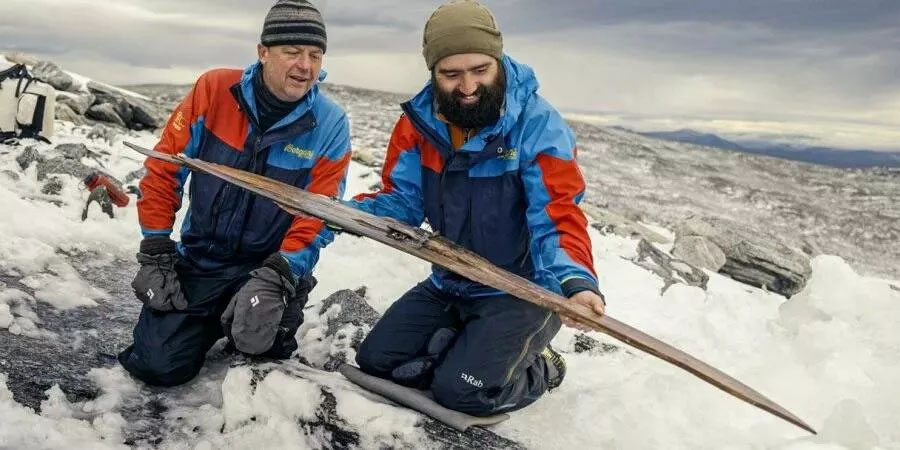 The pre-Viking age skis found in a mountain glacier with a seven-year-interval pose further questions, such as what happened to the skier? Who was he? Was it an accident, such as a fall, an injury or a blizzard? Perhaps his body remains still intact in the same glacier?

A 1,300-year-old prehistoric ski has been found in a 1,000-metre-high glacier outside Digervarden in Reinheimen National Park in central Norway.

The find, unique per se, is a match to a prehistoric ski found in 2014, resulting in a complete pair of the world’s best-preserved skis, national broadcaster NRK reported.

According to archaeologists, the skis are 187 centimetres long and almost 17 centimetres at their widest. They are made of birch and have even retained some of their binding.

BREAKING NEWS! We have just made an incredible discovery at the Digervarden ice patch, Norway. We have found the best-preserved prehistoric pair of skis in the world! 1300 years old and both have the bindings preserved. The second of the two skis has just come out of the ice❤️ pic.twitter.com/fa2SYTSBfY

The second one was ultimately found only five meters from the spot where the first one was unearthed due to drastically receding glacier ice. To get the ski out, they had to use an ice axe, a tool rarely used in archaeological excavations, if at all. This allowed them to carefully remove the ice and get the ski loose.

“This is incredibly rare, and we immediately realized that we are on to something very special”, Innlandet county archaeologist Espen Finstad, told NRK.

By his own admission, seeing both skis from the 8th century, just before the Viking Age, is a humbling experience.

“This is world history. Now you have a whole ski pair with bindings. This is unique,” Finstad said.

The researchers emphasised that archaeological finds are only preserved in the ice if it is at rest, like a giant freezer from the past.

According to Finstad, the discovery poses further questions, including: what happened to the skier? Who was he? And why did he leave his skis far up in the mountains? Did an accident happen? A fall, an injury, a blizzard? Is the skier’s body still intact in the mountains?

Back in 2014, the Secrets of the Ice program found an exceptional pre-Viking ski, 1300 years old, at the Digervarden Ice patch. The ski was complete, including the binding – one of only two skis from prehistory in this condition. pic.twitter.com/6I1sGp0Uhq

Finstad stressed that there have been known traffic routes in the area. He also mused that the skier could have been a hunter.

Remarkably, the skis are far from the only find made in the area. Only this summer, a Viking hamlet was found in the mountains. In May, archaeologists found remains of what may be a 500-year-old dog.

2,700-year-old toilet found in Jerusalem was a rare luxury