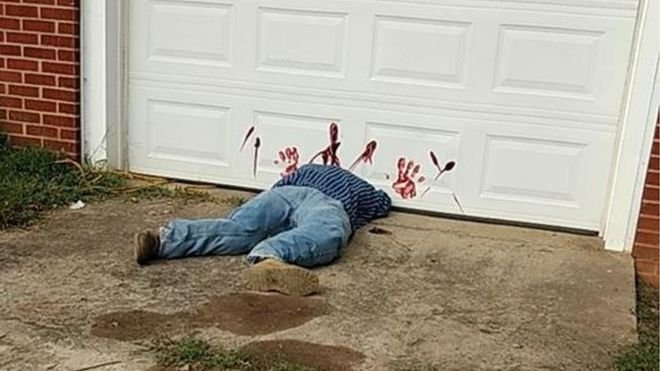 A local US police department has urged people not to call 911 after reports that a man had been crushed by a garage door.

The supposed victim in Greene County, Tennessee, turned out to be a scarily realistic, early Halloween decoration.

The department said it had received calls about a “suspicious person lying in a driveway with bloody handprints on the garage”.

Officers investigated, only to find it was a puppet stuffed with straw.

Greene County TN Sheriff’s Department wrote on Facebook: “ATTENTION EVERYONE!!! For those of you driving on Chuckey Pike in Greene County: THIS IS A HALLOWEEN DECORATION!

“Do NOT call 911 reporting a dead body. Instead, congratulate the homeowner on a great display.”

The display provoked plaudits on the department’s Facebook page.

“Literally congratulations to these people making something look so real!” one user commented.

Someone else wrote: “Can you imagine how many break-ins it could prevent…?”

But not everyone was impressed.

One user wrote: “What kid [sic] of picture does this paint for young children!!!!!”

Halloween is one of the most beloved holidays in the US.

Americans spent a record $8.4bn on the celebration last year, according to the National Retail Federation.

Geneva toilets clogged up with more than $95,000 in cash