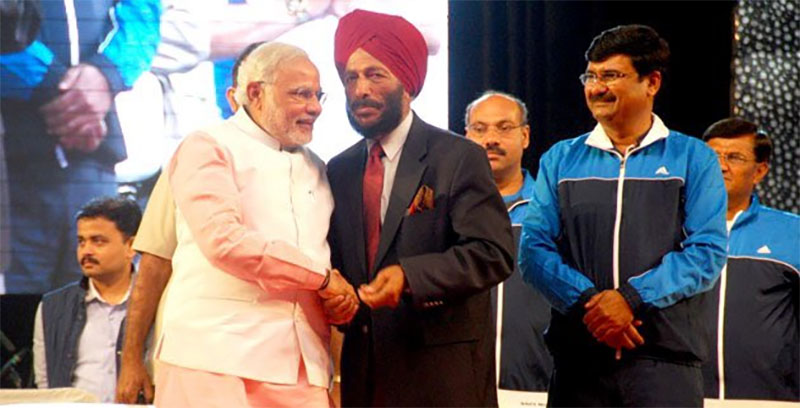 One of India’s greatest athletes, Milkha Singh, has died from Covid-related complications, aged 91.

Popularly known as “the Flying Sikh”, Singh won four Asian gold medals and finished fourth in the 400m final at the 1960 Rome Olympics.

In 2013, his story was turned into the Bollywood film Bhaag Milkha Bhaag – Run Milkha Run.

Singh had contracted Covid-19 last month and died of complications from the disease in a hospital in the northern city of Chandigarh late on Friday.

Prime Minister Narendra Modi led the tributes to the athlete, who has been described as independent India’s first sporting superstar.

In the passing away of Shri Milkha Singh Ji, we have lost a colossal sportsperson, who captured the nation’s imagination and had a special place in the hearts of countless Indians. His inspiring personality endeared himself to millions. Anguished by his passing away. pic.twitter.com/h99RNbXI28

Singh’s exploits on the track and field are legendary in India. He won five golds in international athletic championships and was awarded the Helms World Trophy in 1959 for winning 77 of his 80 international races. He also won India’s first Commonwealth gold in 1958.

Singh grew up in a small village in what, during his childhood, was still British India.

As a young boy who lived in a remote village in Multan province, he saw his parents and seven siblings murdered during the Partition of India and the creation of Pakistan in 1947.

As his father fell, his last words were “Bhaag Milkha Bhaag”, exhorting his son to run for his life.

The boy ran – first to save his life, and then to win medals.

Arriving in India as an orphan in 1947, he took to petty crime and did odd jobs for survival until he found a place in the army. It was there that he discovered his athletic abilities.

Singh won Gold at the 1958 Commonwealth Games in Cardiff and went on to finish fourth in the 400 metres at the Rome Olympics, missing out on a bronze medal by a whisker.

In 1960, he was invited to take part in the 200m event at an International Athletic competition in Lahore, Pakistan. He hadn’t been back to Pakistan since fleeing in 1947 and initially refused to go.

Singh eventually did go to Pakistan. Despite the huge support for his main rival, Pakistan’s Abdul Khaliq, in the stadium, Singh went on to win that race, while Khaliq took the bronze medal.

As Gen Ayub Khan, Pakistan’s second president, awarded the competitors their medals, Singh received the nickname that would stick with him for the rest of his life.

“Gen Ayub said to me, ‘Milkha, you came to Pakistan and did not run. You actually flew in Pakistan. Pakistan bestows upon you the title of the Flying Sikh.’ If Milkha Singh is known as the Flying Sikh in the whole world today, the credit goes to General Ayub and to Pakistan,” Singh told the BBC later.

Even though he never won an Olympic medal, his only wish was that “someone else should win that medal for India”.

What isn’t widely known about #MilkhaSingh & Rome Olympics that had he run 200 meters race (those days you couldn’t run 400 & 200) he would’ve got a medal as his best time was within what winners logged. But in 400 he met 3 of the finest in the world & rest is history.