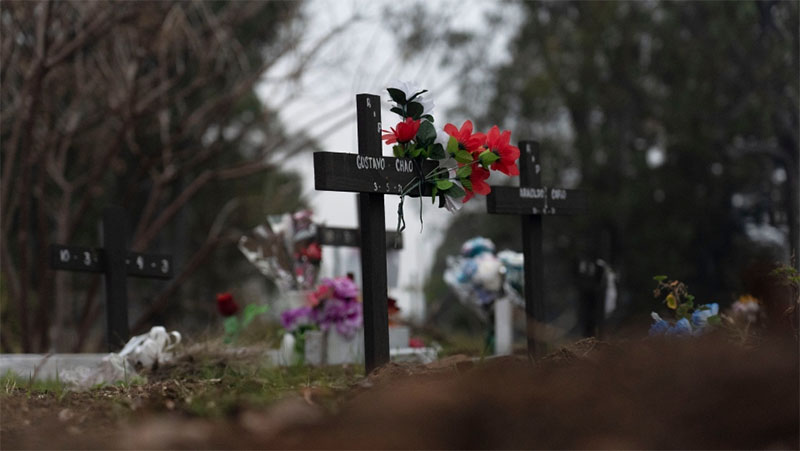 In the San Vicente cemetery in the central Argentine city of Cordoba, Sandra del Valle Pereyra, 50, has come to visit the graves of her parents who both died from COVID-19 that has ripped through the South American nation.

“I have been left alone,” Valle Pereyra told Reuters, saying that she and her siblings were isolating from one another to avoid contagion. “First my mother died and then my father. I don’t know what to feel any more about this terrible disease.”

Argentina has been one of the hardest-hit countries in the region in terms of cases and deaths per capita, with some 4.7 million confirmed infections and a death toll from the pandemic that hit 100,000 on Wednesday.

Daily average cases have fallen since a peak last month and ICU bed occupancy is coming down, though still above 60% nationwide.

“Every life that has gone is a great regret for me,” President Alberto Fernandez said in a speech last week. “I guarantee that we are not going to stop in these months vaccinating each and every Argentine man and woman.”

While developed countries like the United States have reduced fatalities with rapid inoculation programs, countries in South America have topped the charts for daily per capita cases and deaths, with vaccines rollouts stalled by slow supply.

Argentina, a country of some 45 million people, has carried out 25.7 million vaccine jabs, though only around 5 million people are inoculated with the full two doses, mainly using Russia’s Sputnik V, AstraZeneca’s vaccine and China’s Sinopharm.

The vaccine rollout is raising hopes that the country can control the pandemic, but the more contagious Delta variant is igniting surges in cases even in countries like Israel with high vaccination rates, causing them to rethink their vaccination campaigns https://tmsnrt.rs/2TbE5vy.

The pandemic has sharpened an economic crisis already existing in Argentina, which has been largely stuck in recession since 2018 with rampant inflation, strict capital controls and a weak peso currency sparking an outflow of dollars.

“It’s not just the pandemic drowning us in this country. There is also the huge economic crisis,” said Gastón Rusichi, 34, from a team of firefighters in Cordoba who have taken charge of transferring the dead during the pandemic.

“Many relatives call us crying, not only because of the death, but because they don’t have the money… to be able to give a burial as a person deserves,” added Rusichi, who works 12-hour shifts in a biohazard suit for safety.

Argentina’s government reimposed lockdown measures earlier this year amid a steep second wave of infections, some of which have since been rolled back. It has a strict cap on arrivals at the border in a bid to keep out contagious virus variants.

Ezequiel González, a 35-year-old worker in Buenos Aires suburb Tigre, said that it was hard to see how the country could have stopped the pandemic given the need to balance restrictions while battling rising poverty levels.

“We would all have had to lock ourselves up completely and that’s very difficult. You have to go out to the street to earn money to be able to eat and survive,” he said.

A local laboratory is now starting to produce Sputnik V to speed up inoculations and the country recently sealed a deal for 20 million doses of Moderna’s vaccine.

Lautaro Fabian Gomez, 20, however, said lax attitudes by some people going out into crowded areas without wearing face masks was stymieing improvements.

“It makes me very angry and helpless,” he said. “It seems to me that if this is how we act then we are going to have the coronavirus here until 2050.”