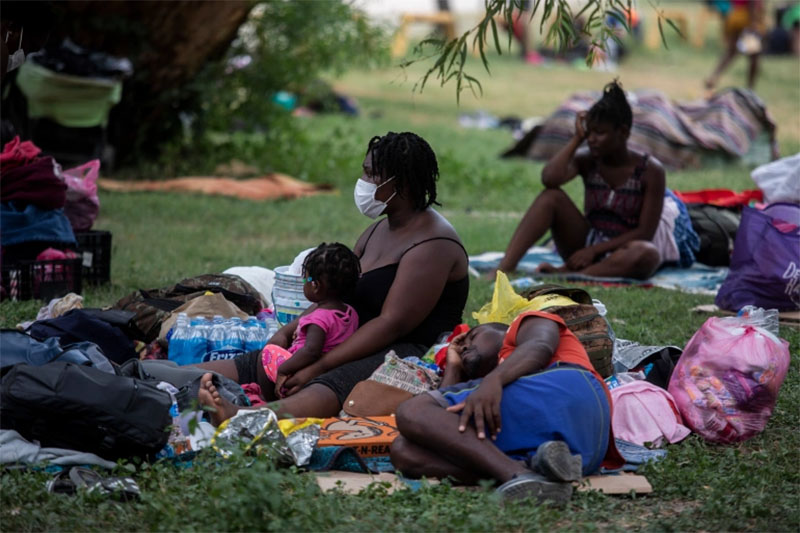 Conditions are deteriorating in a camp on the banks of the Rio Grande River where thousands of mostly Haitian asylum seekers have gathered in hopes of getting asylum in the United States, as pressure mounts on President Joe Biden to halt expulsion flights to Haiti.

Images from the Reuters news agency showed people with small babies and toddlers under makeshift shelters made out of reeds in Del Rio, Texas, just across the river from Mexico.

Clothing was hung out to dry and rubbish was strewn on the ground, while parents washed their children using jugs of river water and tried to find patches of shade in the punishing heat. Migrants and asylum seekers said food remained scarce and there were not enough portable toilets.

The situation at the US-Mexico border has drawn widespread condemnation in recent days, especially after images emerged showing US border officials on horseback using whip-like chords to intimidate Haitian migrants and asylum seekers trying to cross the river.

At its peak, there were as many as 14,000 people camped out under the international bridge in Del Rio, but US authorities have moved thousands away for immigration processing and deported more than 500 Haitians since Sunday.

Mexico and the United States on Wednesday were preparing to fly more Haitian migrants and asylum seekers away from the camp, and the US Department of Homeland Security (DHS) said the deportation flights would continue.

Some Haitians have been released into the US and allowed to pursue their immigration cases, The Associated Press reported on Tuesday, citing two unidentified US officials, undercutting the Biden administration’s public statements that the thousands in the camp faced immediate expulsion.

Other migrants have decided to stay in Ciudad Acuna, on the Mexico side of the border, across from Del Rio, due to shortages of food and other poor conditions in the US. By Wednesday, around 200 people had set up a handful of camping tents and tarps as shelter.

US politicians from both major parties have criticised Biden’s handling of the situation, and rights groups have called on the president to halt a Trump-era policy that is being used to immediately expel people seeking asylum at the US border.

Authorities have ordered an investigation into the US officials who used the whip-like chords, and DHS Secretary Alejandro Mayorkas said the agents involved had been pulled from front-line duties.

The expulsion flights to Haiti have also been slammed as “obscene”, with advocates pointing out that the Caribbean nation is grappling with widespread political instability and rising gang violence, and struggling to rebuild after a devastating earthquake.

Filippo Grandi, the head of the United Nations refugee agency, also has warned that expulsions to such a volatile situation might violate international law.

Most of the Haitians have not arrived directly from Haiti. Many had previously tried to settle in South America, but recounted difficulties finding work amid pandemic-related restrictions and the economic downturn.

On Tuesday, after talks with Haitian government representatives, Mexico said repatriation flights would be offered to those “who wish to return to their country”.

At the same time, Mexico has begun flying migrants away from the US border, as well as sending some by bus towards its border with Guatemala in the south.

The government has flown some 130 people to the southern Mexican city of Villahermosa, and another 130 people were flown to the city of Tapachula on the Guatemala border, a Mexican official said.

Meanwhile, Colombia’s human rights ombudsman Carlos Camargo on Wednesday said some 19,000 people, mainly Haitians, were amassed on the north coast of Colombia, from where they hope to cross to Panama and find a route to the US.

Some have been stranded for weeks in the coastal town of Necocli in the northwestern Antioquia department, waiting for seats on boats that cross the Gulf of Uraba to Acandi, which borders Panama.

Once in Acandi, the migrants start a dangerous, on-foot trek through the Darien jungle, where they battle snakes, steep ravines, swollen rivers, tropical downpours and criminals often linked to drug trafficking.

In a recent report, Doctors Without Borders said criminal gangs in the jungle prey on migrants, and assaults and rapes are common. More than 50,000 migrants have crossed the border Colombia-Panama border so far this year.