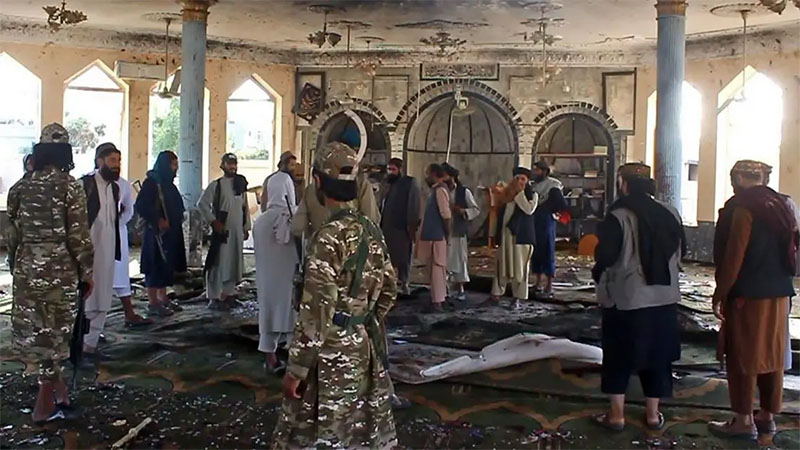 ISIS claimed responsibility for the suicide bombing in Afghanistan which targeted Shia Muslims in a mosque on Friday.

The attack killed at least 46 people and injured more than a 140 in Afghanistan’s northeastern Kunduz province. The extremist group said that an ISIS suicide bomber “detonated an explosive vest amid a crowd” of Shia worshippers who had gathered inside the mosque.

Taliban spokesman confirmed the attack which targeted worshippers while they were performing Friday prayers.

“Today in the afternoon, in the Khanabad Bandar area in the capital city of Kunduz, a blast targeted a mosque belonging to our Shia citizens and martyred and wounded a number of our compatriots,” Zabiullah Mujahid said.

The attack was the deadliest one in Afghanistan since US forces withdrew from Afghanistan when ISIS had targeted Kabul airport with a bombing on August 26 that claimed the lives of 169 Afghans and 13 US servicemen.

Since the Taliban seized control of Afghanistan on August 15, ISIS has ramped up its attacks in the country, targeting Taliban members and Afghan citizens with several bombings, including two deadly ones in Kabul.

The Taliban have tried to downplay the threat played by ISIS in the country claiming it could be easily neutralized in order to highlight their claim that they can govern Afghanistan and guarantee the public’s safety.

Since taking control of Afghanistan, no country has recognized the Taliban’s government with many world powers questioning whether the group can keep the country from becoming a haven for terrorism or a launching pad for terrorist attacks on other countries.

Two killed in Israel strike on Syria base: Monitor