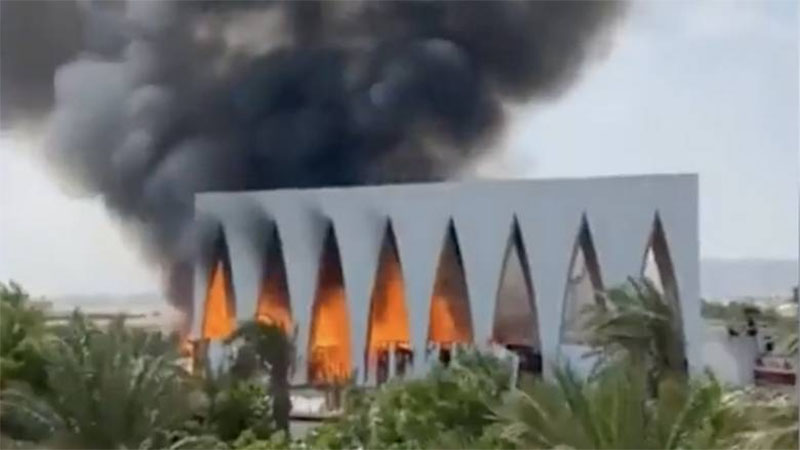 A massive fire broke out in the main hall of the El Gouna Film Festival site in Egypt on Wednesday, one day ahead of the opening ceremony of the fifth edition, according to social media videos and local media reports.

The festival will go on as scheduled on Thursday, organizers said in a tweet. Awards and winners are expected to be announced on October 22.

According to the Chairman of the Board of Directors of Orascom Development Holding Samih Swarez, the fire broke out in the area where the reception was to be held. He also said the stage for tonight’s scheduled press conference was not affected.

“Tonight, everything will be back to normal. Tomorrow people will arrive and say they only saw the fire on tv,” he said in a video statement shared on the festival’s official twitter account.

This is a picture from El Gouna Film Festival’s Plaza, after the fire has been extinguished. GFF extends its gratitude to the Civil Defense Forces and the Red Sea Governorate for their immense help to keep everything under control. @ElGounaFilm will proceed as planned. pic.twitter.com/OHbyhZO9Dj

First responders immediately headed to the scene and firefighters put out the fire shortly after, according to reports.

The cause of the fire has not been revealed and no injuries have been reported.

No further details have been provided on the incident.

Egypt’s El Gouna Film Festival last year was held in October under the supervision of Egypt’s Ministry of Health, amid the coronavirus pandemic.

More than 40 films participated in the festival, from feature narratives and documentaries to short films.

Despite global fears regarding the coronavirus pandemic, the festival intended to aid in boosting the country’s tourism sector.

“There are many opinions, but the main thing we are doing is saying that we are defying this disease and that life must go on,” festival founder and business tycoon, Naguib Sawiris, said, according to Reuters.

He also stressed that the festival would be held with all necessary health precautions.

Last year’s event was the country’s first large-scale event to take place since March 2020, when the government closed airports to international flights, shut down historical sites and placed restrictions on public gatherings in an effort to curb the spread of the virus.