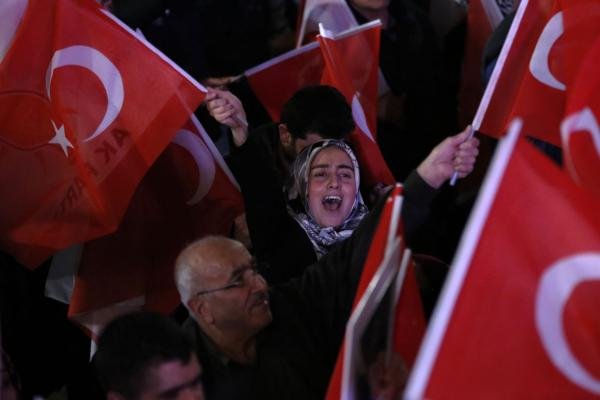 The Organization for Security and Co-operation in Europe election monitor said Turkey’s referendum was not impartial and instead favored President Recep Tayyip Erdogan amid “limitations on fundamental freedoms.”

Among concerns, the OSCE said the referendum did not sufficiently provide impartial media coverage and did not guarantee eligible political parties equal access to public media, which gave “preference to the ruling party and the president in the allocation of free airtime.”

Erdogan claimed victory on Sunday after a majority of Turkish voters appeared to have granted the president sweeping new powers. But the international electoral monitor said that while the referendum’s technical processes were well-administered, there were key issues related to media coverage and the circumstances under which the vote occurred, such as Turkey’s ongoing state of emergency enacted after a failed coup d’etat attempt last year.

The OSCE said the “referendum took place on an unlevel playing field and the two sides of the campaign did not have equal opportunities.”

“Voters were not provided with impartial information about key aspects of the reform, and civil society organizations were not able to participate,” the OSCE said in its preliminary conclusions. “Under the state of emergency put in place after the July 2016 failed coup attempt, fundamental freedoms essential to a genuinely democratic process were curtailed.”

With more than 99 percent of the ballots counted, 51.34 percent of people said “yes” to increase Erdogan’s powers compared with 48.667 percent that cast “no” votes. The results have yet to be validated.

“On referendum day there were no major problems, except in some regions, however we can only regret the absence of civil society observers in polling stations,” Parliamentary Assembly of the Council of Europe delegation head Cezar Florin Preda said in a statement. “In general, the referendum did not live up to Council of Europe standards. The legal framework was inadequate for the holding of a genuinely democratic process. A state of emergency should never be used to undermine the rule of law.”

Turkey’s main opposition party, the Republican People’s Party, has vowed to contest irregularities with Turkey’s Constitutional Court and the European Court of Human Rights. It also called on the Supreme Election Board to annul the referendum results.

“The only way to end ongoing discussions over the referendum’s legitimacy is to annul it. What is necessary is the annulment of this referendum,” Republican People’s Party deputy leader Bulent Tezcan said during a press conference on Monday.

The OSCE also said the dismissal or detention of thousands of citizens following the coup attempt “negatively affected the political environment.”

“One side’s dominance in the coverage and restrictions on the media reduced voters’ access to a plurality of views,” the OSCE wrote. “While the technical aspects of the referendum were well administered and referendum day proceeded in an orderly manner, late changes in counting procedures removed an important safeguard and were contested by the opposition.”

Under the new authority, Erodgan will be able to appoint Cabinet ministers, issue decrees, choose senior judges and dissolve parliament, the Grand National Assembly. The change would also lower the minimum age for lawmakers from 25 to 18, increase the number of seats in parliament from 550 to 600, close down military courts, and introduce same-day parliamentary and presidential elections every five years.