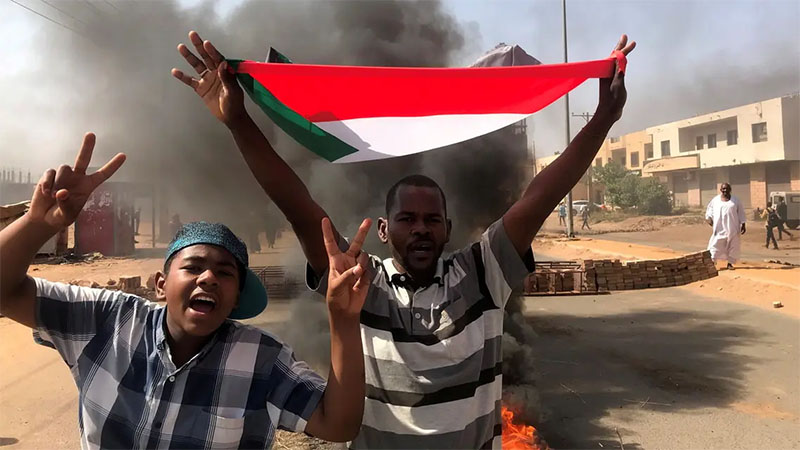 Roads were blocked, shops were shut, phones were down and mosque loudspeakers blared calls for a general strike in Sudan on Tuesday, a day after the army seized power in a coup that triggered unrest in which at least seven people were killed.

Life came to a halt in the capital Khartoum and its twin city Omdurman across the Nile, with roads blocked either by soldiers or by barricades erected by protesters.

The night appeared to have passed comparatively quietly after Monday’s unrest, when protesters took to the streets after soldiers arrested Prime Minister Abdalla Hamdok and other civilians in the cabinet. A health ministry official said seven people had been killed in clashes between protesters and the security forces.

The leader of the takeover, General Abdel Fattah al-Burhan, dissolved the military-civilian Sovereign Council set up to guide Sudan to democracy following the overthrow of long-ruling autocrat Omar al-Bashir in a popular uprising two years ago.

Burhan announced a state of emergency, saying the armed forces needed to protect safety and security. He promised to hold elections in July 2023 and hand over to an elected civilian government then. On Tuesday he dissolved committees that govern trade unions, Arabic news channels reported.

The Sudan information ministry, still loyal to Hamdok, said on its Facebook page the transitional constitution gave only the prime minister the right to declare an emergency and the military’s actions were a crime. Hamdok was still the legitimate transitional authority, it said.

The main roads and bridge between Khartoum and Omdurman were closed to vehicles by the military. Banks and cash machines were shut, and mobile phone apps widely used for money transfers could not be accessed.

Some bakeries were open in Omdurman but people were queuing for several hours, longer than usual.

“We are paying the price for this crisis,” a man in his 50s looking for medicine at one of the pharmacies where stocks have been running low said angrily. “We can’t work, we can’t find bread, there are no services, no money.”

In the western city of El Geneina, resident Adam Haroun said there was complete civil disobedience, with schools, stores and gas stations closed.

The Sudanese Professionals Association, an activist coalition that played a major role in the uprising that toppled Bashir, has called for a strike.

Hamdok, an economist and former senior UN official, was detained and taken to an undisclosed location on Monday after refusing to issue a statement in support of the takeover, the information ministry said. Troops also arrested other civilian government figures and members of the Sovereign Council.

Western governments have condemned the coup, called for the release of the detained civilian leaders and threatened to cut off aid, which Sudan needs to recover from an economic crisis.

The US has said it was immediately pausing delivery of $700 million in emergency support.

Sudan has been ruled for most of its post-colonial history by military leaders who seized power in coups. It had become a pariah to the West and was on a US terrorism blacklist under Bashir, who hosted Osama bin Laden in the 1990s and is wanted by the International Criminal Court in the Hague for war crimes.

Since Bashir was toppled, the military shared power uneasily with civilians under a transition meant to lead to elections in 2023. The country had been on edge since last month when a failed coup plot, blamed on Bashir supporters, unleashed recriminations between the military and civilians.