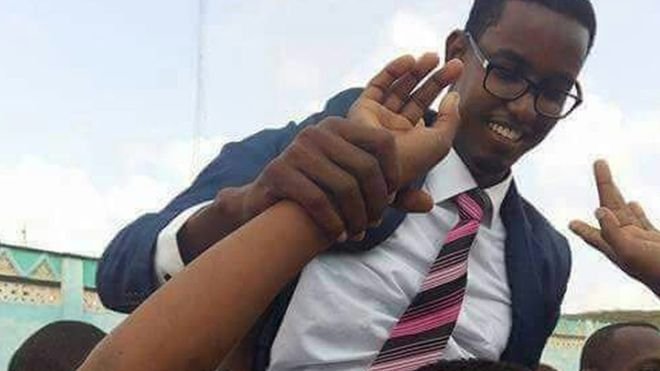 Somalia’s security forces have shot dead a 31-year-old government minister after mistaking him for a militant Islamist, officials have said.

He was killed in his vehicle near the presidential palace in the capital, Mogadishu, the officials added.

Somalia’s security forces have been battling militants who carry out suicide and gun attacks in Mogadishu.

Troops are sometimes nervous, and have previously shot officials – and each other – by mistake, says BBC Somalia analyst Abdullahi Abdi.

But Mr Abas, the public works minister, is probably the most high-ranking official killed by “friendly fire”, he adds.

Mr Abas was a former refugee who grew up in Dadaab camp in Kenya, home to hundreds of thousands of Somalis who fled drought and civil war.

He became the country’s youngest MP last November, aged 31, when he defeated a former minister.

The country held elections in February and Mohamed Abdullahi Farmajo became the new president in a surprise result.

The president has not commented on the circumstances of Mr Abas’ killing, but said he had ordered security chiefs to “immediately get to the bottom of this unfortunate tragedy” and make sure the perpetrators were “brought to book”.

Information Minister Abdirahman Osman said several people had been arrested, but did not give details, state-owned Radio Mogadishu reported.

Security forces on patrol came a across a vehicle blocking the road and, thinking it was being driven by militants, opened fire, police Major Nur Hussein told Reuters news agency.

Mr Abas was killed “by mistake – they opened fire on his car accidentally. May God rest his soul”, Mogadishu mayoral spokesman Abdifatah Omar Halane was quoted as saying.

Much of Somalia is still under the control of militant Islamist group al-Shabab, which is affiliated to al-Qaeda.