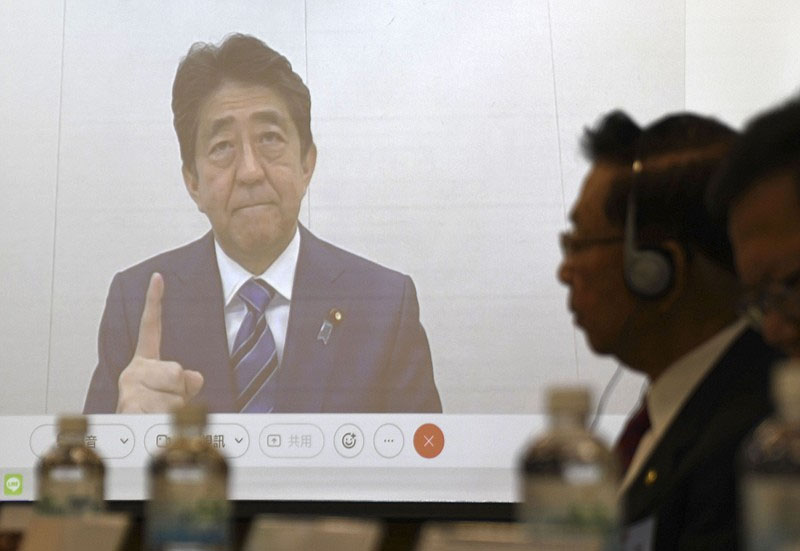 China lashed out Wednesday at Shinzo Abe after the former Japanese prime minister warned of the serious security and economic consequences of any Chinese military action against self-ruled Taiwan.

He said China “strongly opposes and deplores this” and had protested to Japan through diplomatic channels.

“No one should underestimate the resolve determination, firm will and strong ability of the Chinese people to defend national sovereignty and territorial integrity,” Wen told reporters at a daily briefing. “Anyone who dares to repeat militarism and challenge the bottom line of the Chinese people will surely be shattered in the face.”

That came after Abe delivered remarks against a miscalculation over Taiwan by China’s ruling Communist Party.

China claims self-governing Taiwan as its own territory to be annexed by force if necessary. It has been upping its military threat by holding military exercises near the island and frequently sending warplanes into its air defense identification zone.

“I think that Japan, Taiwan and all the democratic countries need to keep urging President Xi Jinping and the leaders of the Chinese Communist Party not to step onto a wrong path,” Abe said in a virtual speech on Taiwan-Japan relations to a Taipei-based think tank.

A Chinese invasion of Taiwan would constitute a significant threat to Japan and therefore “an emergency for the Japan-U.S alliance,” he said. “People in Beijing, especially President Xi Jinping, should never have a misunderstanding in recognizing this.”

Taiwan was a Japanese colony for 50 years until the end of World War II and relations between the two remain close, shored up by the U.S.-Japan defense alliance and Washington’s strong, if unofficial, support for the island.

Despite strong economic and cultural links and Beijing’s insistence that Taiwan must eventually be unified with it, only a small percentage of Taiwanese support such a union.

Abe also expressed his support for Taiwan’s entry into the the Comprehensive and Progressive Agreement for Trans-Pacific Partnership, the Tokyo-led trade grouping that emerged from the Trans-Pacific after it was abandoned by former U.S. President Donald Trump.

Taiwan submitted its membership application in September, a week after China.

“I will support Taiwan’s participation,” Abe said, adding that the organization is “crucial in order to keep strengthening the international order based on rules. I think Taiwan is more than qualified to participate.”