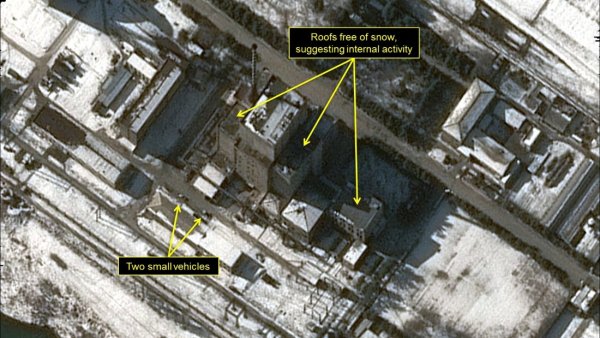 North Korea may be preparing for its next nuclear test at its site in Punggye-ri.

Commercial satellite images taken Wednesday indicate ongoing activity around the North Portal, new activity in a main area and the presence of personnel at Punggye-ri’s command center, according to 38 North, a Johns Hopkins University website dedicated to North Korea issues.

A “small vehicle or trailer” can be seen immediately outside the entrance of the North Portal, with another trailer on the road south of the portal, wrote Joseph S. Bermudez Jr. and Jack Liu.

The activity could mean North Korea plans to conduct its sixth nuclear test in the near future.

Such action, however, could mean more pressure from the United States and China, and even the possibility of a military response at a time when U.S. President Donald Trump has stated “all options” are on the table in response to North Korea provocations.

In Seoul, the possibility of a nuclear test is being largely dismissed, according to Yonhap.

“There has been no unusual activity so far,” said Roh Jae-chun, a spokesman for the country’s joint chiefs of staff.

China has becoming increasingly vocal about North Korea’s missile and nuclear threats, and state media editorials have begun to address Pyongyang directly with regards to a possible solution.

The article published Thursday pledged support for the Kim Jong Un regime, and for North Korea’s stability, if the country agrees to denuclearization.

U.S. drops ‘mother of all bombs’ on rural Afghan IS compound