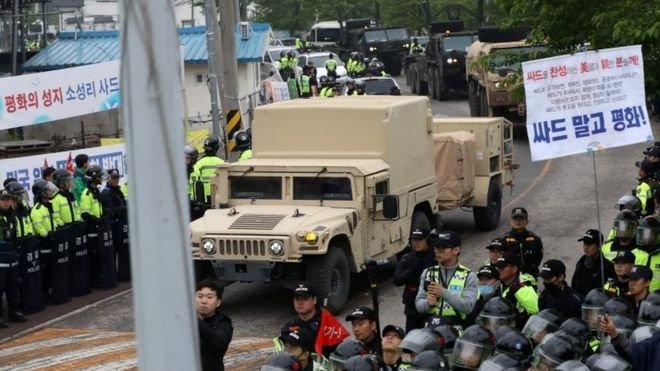 The US military has started installing a controversial missile defence system at a site in South Korea, amid high tensions over neighbouring North Korea’s nuclear and missile ambitions.

The Thaad system is designed to protect against threats from North Korea.

Hundreds of local residents protested against the deployment, as vehicles carrying equipment arrived at the site in the south of the country.

China argues Thaad will destabilise security in the region.

The US has in recent days deployed warships and a submarine to the Korean peninsula, amid fears North Korea could be planning further missile or nuclear tests.

The Trump administration, which has been urging China to rein in its ally, North Korea, is due to hold a classified briefing for senators on the situation at the White House later on Wednesday.

The Terminal High-Altitude Area Defense (Thaad) system is designed to intercept and destroy short and medium-range ballistic missiles during their final phase of flight.

“South Korea and the United States have been working to secure an early operational capability of the Thaad system in response to North Korea’s advancing nuclear and missile threat,” South Korea’s defence ministry said in a statement.

The system – agreed last year under the Obama administration – is not expected to be operational until the end of 2017, it added.

The development coincides with China launching a new aircraft carrier – the first to be made domestically – in a bid to boost its own military presence in the region.

Television footage showed military trailers carrying what appeared to be defence equipment to a disused golf course some 250km (155 miles) south of the South Korean capital Seoul on Wednesday morning.

Dozens of police lined the road, trying to block hundreds of protesters, some of whom were hurling water bottles at the vehicles.

More than 10 people were injured in the clashes with police, activists said. Many of the protesters were local residents of the two towns closest to the military site.

“We will continue our fight and there’s still time for Thaad to be actually up and running so we will fight until equipment is withdrawn from the site and ask South Korea’s new government to reconsider the plan,” protester Kim Jong-kyung told Reuters news agency.

Police were unable to confirm the casualties.

China has expressed “serious concern” over the Thaad deployment and is urging the US and South Korea to withdraw the system, foreign ministry spokesman Geng Shuang told reporters on Wednesday.

The deployment has caused significant tension with China – South Korea’s largest trading partner – and coincided with a number of economic measures imposed by China, including a ban on tour groups which saw a 40% drop in the number of Chinese visitors in the past month.

South Korea last month lodged a complaint with the World Trade Organization, but China denies its recent moves are related to the Thaad deployment.

With tensions high in the region, North Korea and the US are continuing to exchange heated rhetoric over the scale of Pyongyang’s missile and nuclear programme.

US Vice-President Mike Pence warned North Korea not to “test” President Donald Trump, after it conducted a failed ballistic missile test on 16 April.

On Tuesday, a US submarine – the USS Michigan – joined a group of warships in the Korean peninsula led by aircraft carrier Carl Vinson.

US President Donald Trump had earlier vowed to send an “armada” to the region over North Korea’s missile tests.

North Korea meanwhile threatened to sink the aircraft carrier and launch a “super-mighty pre-emptive strike” against what it called US aggression.