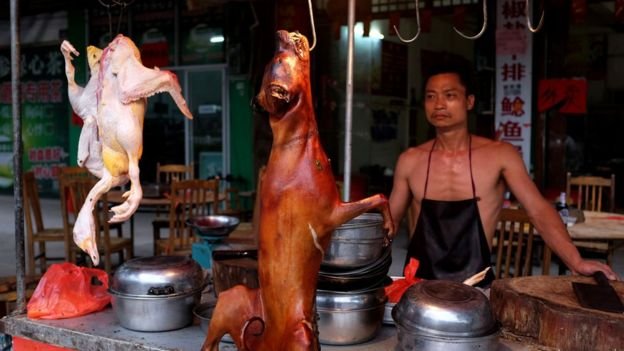 According to US campaigners, the Yulin dog-eating festival in China, notorious for its animal cruelty, will this year be banned from selling dog meat.

Yet doubts remain over what has been said, and some vendors told the BBC they had heard nothing about a ban.

Eating dogs is not illegal in China but the annual festival in Guangxi draws widespread domestic and international opposition each June.

It is estimated that in Yulin’s heyday a few years back, some 10,000 dogs and cats were killed and eaten during the 10-day Lychee and Dog Meat Festival – some still with their pet collars on.

But numbers have been falling in recent years as opposition grew in China and internationally.

Several animal rights activist groups are saying that vendors and restaurants have been told no dog meat will be allowed to be sold during this year’s festival nor in the days running up to it.

California-based campaign group DuoDuo said they had heard this from “several reliable sources in Yulin”, calling it “a crucial domino on the road to topple the dog meat industry”.

The Humane Society International said that “if this news is true as we hope, it is a really big nail in the coffin for a gruesome event that has come to symbolise China’s crime-fuelled dog meat trade”.

Peter Li, China policy specialist at HSI, told the BBC the authorities had already tried to discourage the practice, but that this year, they would be fining those found violating the ban.

The rule will affect dog meat retailers, market traders as well as restaurants, he said. But it will be temporary – meaning most dogs could be killed ahead of the event – and is not being announced officially.

“There is still resistance among the dog meat traders against any drastic rules,” said Mr Li.

“Across the country, they promoted dog eating as a national tradition and Chinese food culture.

“This is not true but still, local authorities in Yulin will be hesitant to do something drastic because of social stability concerns. They’ll be worried it will cause social disturbance.”

The activists are attributing the change in policy to a new Communist Party secretary of Yulin, Mo Gong Ming.

He reportedly wants to burnish Yulin’s image and establish it as a city of culture – which would be hard if each year pictures of graphic animal cruelty hit the global headlines.

Locals in Yulin: ‘What ban?’

But reports of a ban seem to have come as a surprise to people in Yulin.

“Banning the sales of dog meat? I’ve not heard of it,” the owner of a popular dog meat restaurant in the city told the BBC.

“Whoever wants to eat will continue to eat. Why is dog meat any different from other meat anyway?”

The US activists said that only some retailers and restaurants had been notified so far, but other vendors the BBC spoke to reacted the same way and said they were confident they could continue to sell dog meat.

Several local government officers also said they had not heard anything about a ban.

A Chinese activist who travels to Yulin each year to protest against the festival told the BBC she had heard rumours of a ban, but that no-one knew where the information had come from.

Last year the government banned the killing of dogs out in the open, itself a huge step to take.

BBC staff in Beijing say the latest reports have not appeared in Chinese media – even though it would be very good international PR for the city – and point out that the dog festival is a huge revenue-earner for Yulin, so banning it entirely would be devastating for the economy.

A tradition dying on its own?

While the tradition of eating dog meat dates back some 500 years in China, South Korea and other countries, consumption has never been as widespread as with other meats.

City officials have been trying to distance themselves from the festival, pointing out that it is staged by private businesses not the authorities. A crackdown on something that’s not illegal is hard to pursue.

Animal rights groups have tended to focus on the fact that many of the dogs are thought to be stolen from homes or farms, loaded on trucks and driven to the north-west, where dog meat is most popular.

“There are no dog meat farms in the country,” says Mr Li, adding that experiments with farms in the 1990s proved unprofitable.

Last June, a petition signed by 11 million people around the world was handed to Yulin’s government, calling for the event to be banned.

But things are changing at home too, as there is an increasingly powerful community of animal lovers in China.

“There are 150 million dogs in China,” Mr Li explains. “So one in every 10 Chinese has a dog. And 40% are thought to be household animal, pets.” Fewer than 5% of people in China are frequent dog meat eaters, he says.

Animal rights activists like him hope that eventually, dog meat will fall off the menu altogether.