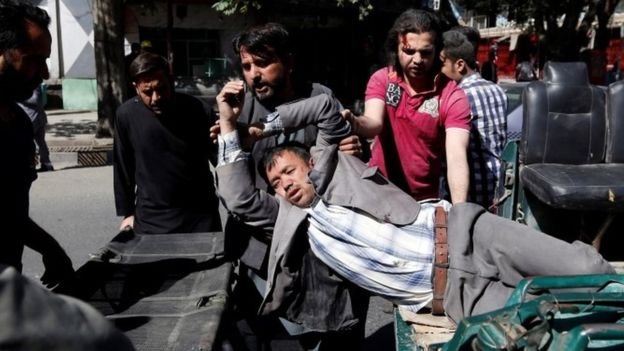 A powerful vehicle bomb has hit the diplomatic area of the Afghan capital, Kabul, killing at least 80 people and injuring 350.

It struck near Zanbaq Square in the heavily fortified zone, with civilians said to be the main casualties.

The morning rush-hour blast created a massive crater and blew out windows and doors hundreds of metres away.

The Taliban have denied carrying out the attack. There has been no word so far from so-called Islamic State.

Both groups have been behind recent attacks in the country.

The BBC has said that Mohammed Nazir, a driver for the corporation’s Afghan service, died in the explosion.

Makeshift ambulances carried wounded away from the scene, as frantic relatives gathered both at the cordoned-off perimeter of the blast site and later at hospitals to try to locate loved ones.

Images showed dozens of blackened and burned out cars. More than 50 vehicles were destroyed.

Basir Mujahid a spokesman for Kabul police, told Reuters news agency the explosion had taken place close to the German embassy but added it was “hard to say what the exact target is”.

Some reports say the bomb was in a lorry or water tanker. One Western diplomatic source told Agence France-Presse it was packed with more than 1,500kg of explosives

The BBC’s Harun Najafizada in Kabul says questions are already being asked about how the vehicle could have penetrated such a heavily fortified area, with its 3m (10ft) high blast walls, to carry out the deadliest attack in the capital in years.

Initial reports suggest civilians bore the brunt of the casualties.

The interior ministry has called on residents to donate blood, saying there was a “dire need”.

One local shop owner, Sayed Rahman, told Reuters his store was badly damaged, adding: “I have never seen such a terrible explosion in my life.”

Another resident, Abdul Wahid, told the BBC the blast “was like a heavy earthquake”.

Several international and local sources have been reporting on casualties:

Japan to take action with US after N Korea missile test