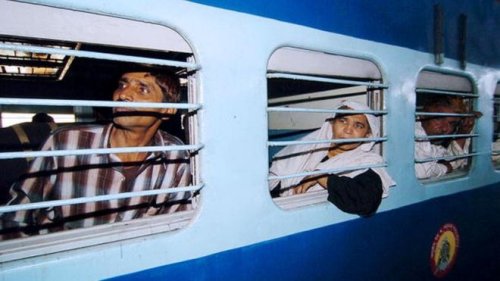 A man arrested in India for being part of a mob that attacked a group of four Muslim teenagers on a train has said on TV that he was goaded into it by others because Muslims ate beef.

The man, identified only as Ramesh, said he was drunk at the time of the attack in Haryana state on Friday.

One of the boys, 16-year-old Junaid Khan, was killed in the assault carried out by a mob of about 20 men.

Hindus consider cows sacred and killing them is illegal in several states.

Police say that the reason for the murder – in which three other youths were injured by the knife-wielding mob – was mainly because of a row over seat space on the train.

“There are also allegations that some words which hurt religious sentiments were also said,” a police spokesman told NDTV, “after which things got out of hand.”

Speaking on camera Ramesh said that he was “told by his friends to attack the Muslim boys because they ate beef”.

The murdered youth’s father said after the attack that the four boys were targeted after being taunted about their Muslim clothing.

Another relative – Junaid’s brother Hassem – was quoted as saying that the mob had paid no attention to their repeated protestations that they were not carrying any beef.

“They were pointing at a packet which had food and saying we should not be allowed to sit [in the train] since we were carrying beef,” he said.

While eating beef is not unlawful in India, it is taboo in some states where Muslims have apparently been killed amid heightened public rhetoric about the need to protect cows.

One other man along with Ramesh has been arrested in connection with the killing.

Hindus comprise about 80% and Muslims about 14% of India’s 1.2 billion people.